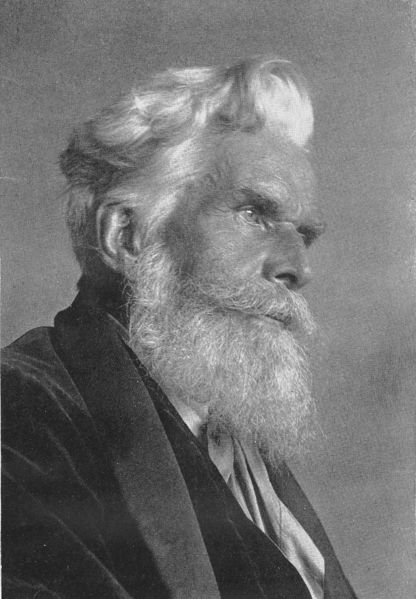 It was on this date, February 2, 1859, that English psychologist and sexologist Havelock Ellis was born Henry Havelock Ellis in Croydon, Surrey. In his youth, he traveled around the world with his father, a sea captain, stopping in Australia, where he worked as a teacher in New South Wales. There he read Life in Nature by philosopher and sex reformer James Hinton and saw his own life's work. Hinton's book caused Ellis to abandon the Christianity of his youth for a variety of Vitalism. "There is," he observed, "a very intimate connection between hypnotic phenomenon and religion."*

Back in London, Ellis trained in St. Thomas's Hospital, and concentrated on the scientific and psychological study of sex. His studies yielded his six-volume Studies in the Psychology of Sex, appearing from 1897 to 1910. But it was his Sexual Inversion, published first in Germany in 1896 (Das konträre Geschechtsfühl) that got his bookseller prosecuted, and a British judge to declare it obscene. It had been only recently that Oscar Wilde was condemned for homosexuality, so when Ellis's work concluded that homosexual behavior was not a disease or a crime, Victorian society was appalled.

In fact, Ellis's liberal views on sexuality outraged the English clergy, and based on the private knowledge of one writer,** they attempted "to trap and prosecute him." That he was a Freethinker is shown in his Affirmations (1897) and My Life (1940). Ellis died on 8 July 1939 at the age of 80. It was Havelock Ellis who wrote, "The whole religious complexion of the modern world is due to the absence from Jerusalem of a lunatic asylum."†