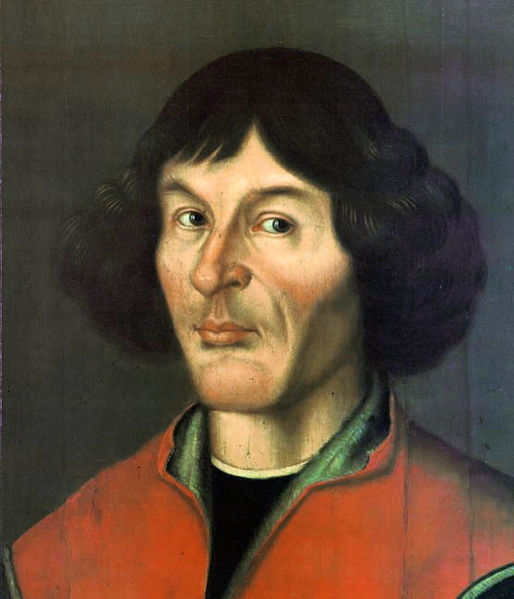 It was on this date, February 19, 1473, that Nicolaus Koppernigk, known to science history by his Latinized name, Nicolaus Copernicus, was born in Torun, what is now known as Thorn in modern Poland. Copernicus lost his father at age 10 and was taken under the wing of his Uncle Lucas, a free-living Polish cleric, who planned to push Nicolaus into a clerical career. Nicolaus entered Krakow University and studied Latin, mathematics, astronomy, geography and philosophy. Later, while studying in Italy, Copernicus learned that he had been appointed canon at Ermland Cathedral — a bit of a surprise because Copernicus was neither a cleric nor very devout. Indeed, his uncle (now Bishop of Ermland) had arranged a comfortable income for him.

But while in Italy, Copernicus had become fascinated with astronomy. He reluctantly returned home to take his cathedral position, but soon begged to return to Italy and was granted leave to do so in 1501. While there, he studied medicine and canon law, but continued to pursue astronomy. When his uncle died in 1512, Copernicus returned to Poland and made Frauenburg his full-time residence. His clerical duties being very light, there he resumed his astronomical study at the little observatory in one of the town's towers. Two years later, he set down in a handwritten manuscript his ideas of a sun-centered solar system — a "heliocentric" system — ideas that were at extreme variance with Church doctrine. The church taught that the earth was stationary and the sun revolved around God's creation.

It was about this time that Copernicus began to write the book in which his reputation resides: De revolutionibus orbium cœlestium (On the Revolutions of the Heavenly Bodies). But from 1514 until the end of his life, he dared not publish it. According to the Roman Catholic Church, God had written the ultimate book of the heavens, and it was God's idea that "a solid vault — a firmament — was extended above the earth, and that the heavenly bodies were simply lights hung within it." (as White paraphrased it in his Warfare of Science with Theology)

The observable planets (the Greek root means "wanderer") circled the earth just as the sun did. And even when careful observation revealed that the circling planets sometimes doubled back on themselves, this retrograde motion did not mean that they were obviously fellow wanderers around a central sun — the simplest and ultimately the correct explanation — but were obeying some obscure law of God's creation. Disagreeing with the Church's interpretation of the Bible was not something over which to lose one's head!

The Catholic Encyclopedia generously absolves itself of all responsibility for Copernican reticence, saying,

Opposition was first raised against the Copernican system by Protestant theologians for Biblical reasons... On the Catholic side opposition only commenced seventy-three years later, when it was occasioned by Galileo. On 5 March, 1616, the work of Copernicus was forbidden by the Congregation of the Index "until corrected", and in 1620 these corrections were indicated [Copernicus had been dead for 77 years!]. Nine sentences, by which the heliocentric system was represented as certain, had to be either omitted or changed. This done, the reading of the book was allowed. In 1758 the book of Copernicus disappeared from the revised Index of Benedict XIV.

True, there was contemporaneous talk at Rome, and elsewhere in Europe, of the curiosity of the double motion of the earth – spinning on its axis and simultaneously revolving around the sun – but it was "just a theory," as creationists like to dismiss the theory of evolution, even though this theory, too, is as unassailable as science as heliocentricity was dangerous to theology. Copernicus could read the tenor of the times, saw a very real danger, and dedicated his book to the Pope. He even persuaded his friend, Andreas Osiander, to write a sycophantic preface, saying, in effect, "please don't take me seriously." Even so, Copernicus delayed publication.

Having hidden for nearly 30 years, On the Revolutions of the Heavenly Bodies was finally delivered to Copernicus as Copernicus was being delivered to heaven: he died with the first edition in his hands, on 24 May 1543. That fawning introduction kept the Copernican theory off of the Index of Prohibited Books for about 75 years — until Galileo forced the issue. But that was not until Galileo's first trial for heresy, in 1616, and Copernicus was by then beyond the reach of the Inquisition.

"I am so glad that my God is not the God of the High Church or of the Low," said Nightingale. She despised the churches and was an advanced Rationalist.