February 17: Bruno Burned for His Opinions 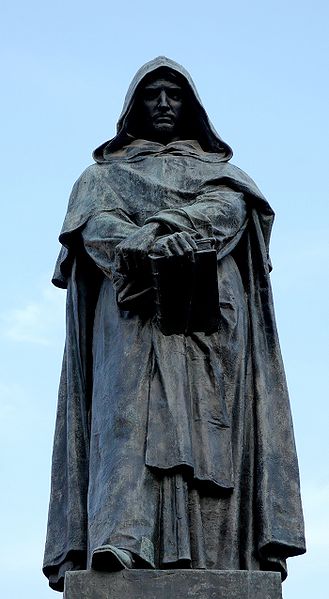 It was on this date, February 17, 1600, that Italian philosopher Giordano Bruno was burned to death for his religious opinions at the Campo de' Fiori in Rome. He was born Filippo Bruno, in 1548, in the Italian town of Nola, in Campania, in the Kingdom of Naples, and received a Neapolitan education. When he entered the Dominican order at San Domenico monastery in 1565, the seventeen-year-old took the name Giordano.

Bruno was brilliant and had an astounding memory. But in 1576 his education in the Greek-Arab culture of southern Italy, a legacy of the Saracens and anti-papal Frederic II — and his refusal to hold his tongue when discussing his original ideas (i.e., his theological heresies) — necessitated his escape from the order at age 28, first to Switzerland, then to France, to England, and finally to Germany.

It was in England (1584-1585) that Bruno published his chief works and became friendly with like-minded Deists. Only there did he find respite from the narrow-mindedness of both Protestants and Catholics. Bruno was more Pantheist than Atheist, a lover of nature and a seeker of truth — a believer in God's creation rather than in dogma. Even the Catholic Encyclopedia admits, "His attitude of mind towards religious truth was that of a rationalist." But there was no safe place for a Rationalist in any country of Renaissance Christendom.

The wandering author of The Art of Memory (Ars Memoriae) and Of the Shadow of Ideas (De Umbris Idearum) was enticed back to Italy by a wealthy nobleman of Venice, seeking his secret memory tricks. But the nobleman feared that Bruno would depart before imparting that learning. He alerted the Roman Inquisition to Bruno's whereabouts and, by morning, the philosopher had been detained by the dogmatists. Rather than recant his heresies, Bruno tried to convert his inquisitors to his own natural philosophy. Says the Catholic Encyclopedia, "he failed to feel any of the vital significance of Christianity as a religious system," which is tantamount to blaming the victim.

Surely Bruno was dangerous to the faith, but the Venetians did not want to kill him. In 1592 Giordano Bruno was dragged to a dungeon in Rome, where he remained for seven years a prisoner. He was repeatedly tortured, but refused to recant. How could he? To Bruno it would have been easier for him to change his sex than to change his mind. Then on 10 February 1600, certain that this one intransigent man could bring down the entire Christian edifice, the Inquisition allowed him a final week to recant or be executed.

Bruno's answer was the same. As Foote and McLaren write, Bruno was

sentenced to be burnt alive, or, as the Holy Church hypocritically phrased it, to be punished "as mercifully as possible, and without effusion of blood." Haughtily raising his head, [Bruno] exclaimed: "You are more afraid to pronounce my sentence than I to receive it." He ... was burnt to death on the Field of Flowers. To the last he was brave and defiant; he contemptuously pushed aside the crucifix they presented him to kiss; and, as one of his enemies said, he died without a plaint or a groan.*

He was the first real martyr, — neither frightened by perdition, nor bribed by heaven. He was the first of all the world who died for truth without expectation of reward. He did not anticipate a crown of glory. ...

The murder of this man will never be completely and perfectly avenged until from Rome shall be swept every vestige of priest and pope, until over the shapeless ruin of St. Peter's, the crumbled Vatican and the fallen cross, shall rise a monument to Bruno, — the thinker, philosopher, philanthropist, atheist, martyr.**

Although the Vatican still stands, a monument to Giordano Bruno now looks out over the plaza where he was burned. It was erected there in 1889 by Italian patriots.