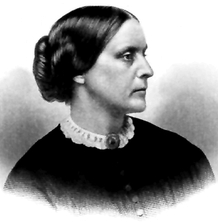 It was on this date, February 15, 1820, that American feminist and social reformer Susan B. Anthony was born Susan Brownell Anthony in Adams, Massachusetts, into a strict Quaker family. Nevertheless, Anthony was taught from youth the virtues of self-discipline, principled convictions, and belief in one's own self-worth, and developed a sense of justice and moral zeal. "I was born a heretic," she said. "I always distrust people who know so much about what God wants them to do to their fellows."

Anthony taught for fifteen years, but was attracted to the Temperance and Abolitionist movements. Her association with Elizabeth Cady Stanton (1815-1902), led her to join the Feminist movement in 1852, to which she eventually dedicated her life. One biographer noted that "more than any other suffrage leader, [Anthony] was the victim of masculine ridicule." In spite of this opposition, Anthony traveled and lectured nationwide for the female vote, the right to own property, the right to organize, and equal pay for equal work. Along the way, in 1900, Anthony coaxed the University of Rochester — her last home — into admitting women.

It is a characteristic of the early days of social reform movements that the pioneers were almost wholly Freethinkers, Agnostics, Deists and even Atheists. So it was with Anthony, who was careful to keep her platform broad, but said,

I tell them I have worked 40 years to make the [Woman Suffrage] platform broad enough for Atheists and Agnostics to stand upon, and now if need be I will fight the next 40 to keep it Catholic enough to permit the straightest Orthodox religionist to speak or pray and count her beads upon.

She mostly kept her Agnosticism to herself, but elsewhere Anthony said,

What you should say to outsiders that a Christian has neither more nor less rights in our Association than an atheist. When our platform becomes too narrow for people of all creeds and of no creeds, I myself shall not stand upon it.

With, Stanton, Matilda Joslyn Gage (1826-1898), and others, Anthony wrote the standard History of Woman Suffrage (1881-7), in which she often attacks the Churches. It was Anthony who said, "The religious persecution of the ages has been done under what was claimed to be the command of God."* The first historical woman to have her image on a U.S. coin, Susan B. Anthony died on 13 March 1906, a woman of admirable character and the greatest leader the American feminist movement ever knew.**

It was on this date, November 13, 1969, that Somali-born American feminist and atheist activist, writer and politician Ayaan Hirsi Ali was born Ayaan Hirsi Magan in Mogadishu, Somalia. While her father, a leading figure in the Somalian Revolution, was in prison, Ayann’s grandmother had the 5-year-old young girl’s genitals ritually cut off in what […]