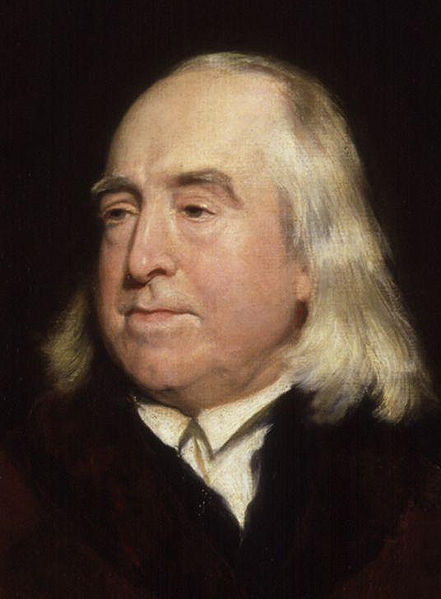 It was on this date, February 15, 1748, that British jurist and social reformer Jeremy Bentham was born into a Tory family in Houndsditch, in London, the son of a lawyer. A precocious learner, Bentham studied Latin at age four and sailed through Oxford, pausing only long enough to condemn the "mendacity and insincerity" of its religious atmosphere. He embarked on a legal career, but objected to its servitude to creeds, so he turned toward social reform: prison and legal reform and education reform: he founded University College, London, opening it to Non-Conformist, Catholic and Jewish students.

Said Bentham, "There is no pestilence in a state like a zeal for religion, independent of morality."* One of the founders of the philosophy of Utilitarianism, and a mentor to John Stuart Mill, in private Bentham was candid about his Atheism: he called Christianity "Jug" or "Juggernaut" in unpublished manuscripts.** With English historian George Grote he wrote Analysts of the Influence of Natural Religion on the Temporal Happiness of Mankind (1822), under the pseudonym "Philip Beauchamp," a work in which both attacked religion and professed Atheism.

A part-time neologist, Bentham introduced the words "international," "maximize," "minimize," and "codification" into English. Jeremy Benthan died in London a wealthy man on 6 June 1832. His legacy was a tens of thousands of unpublished manuscript pages, some of which were eventually published. "The spirit of dogmatic theology," said Bentham, "poisons everything it touches."†