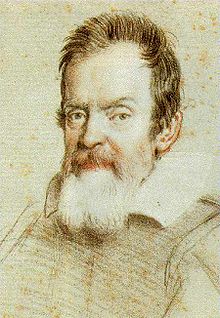 It was on this date, February 15, 1564, that Galileo Galilei was born in Pisa, now in Italy but then a dependency of the city-state of Florence. Florence was where Galileo was educated, as that is where Arab Sicily shared its science. But Florence was more in love with literature, so Galileo moved north to teach at Padua University.

After studying the optics which Roger Bacon borrowed from the Arabs, Galileo adapted the invention of a Dutch spectacle-maker and constructed an improved telescope, with which he discovered the moons of Jupiter, sun spots and other marvels not accepted in biblical cosmology. For this he was celebrated even in Rome, and returned south to Pisa. But Pisan priests denounced Galileo to the Roman Inquisition because the stoppage of the sun by Joshua (10:12-14; cf. Psalms 93 and 104, Ecclesiastes 1:5) could not be reconciled with which Galileo's observations.

Galileo had proven through direct observation what Nicolaus Copernicus had only conjectured through reason and mathematics 72 years earlier: that the sun, not the earth, stands at the center of the solar system. In 1615 Cardinal ("Saint") Robert Bellarmine — a 73-year-old Jesuit whose knowledge of science could fill a small chalice — summoned the 51-year-old scientist to Rome, charging that his cosmological idea was "formally [i.e., "explicitly"] heretical, inasmuch as it expressly contradicts the statements of Holy Scripture in many places."

In 1616, the Inquisition put all works teaching the Copernican system on the Index of Prohibited Books. But in 1621 Bellarmine died, and two years later a new pope, Urban VIII (fellow Florentine Maffeo Barberini), was seated. Even the Catholic Encyclopedia admits, "Urban's greatest fault was his excessive nepotism." Urban was the pope of the Thirty Years War: on his watch funds earmarked to defend Catholic Europe were showered instead on Rome and relatives — that is, "stinting Ferdinand and the Catholic League in Germany," as the Catholic Encyclopedia puts it, in favor of his nephews and brother.

Galileo continued to publish, as if never forbidden to do so, but instead of turning his caustic wit only on the Jesuits, whom Urban hated, when he published his Dialogue on the Two Principal Systems of the World (1632), he not only attacked the theological cosmology, but debated a weak-witted defender of the old system. This character was widely believed to be a caricature of Urban himself.

The pope, never a friend to science in the first place, was not amused. Urban was almost gleeful in his abuse of the ailing and nearly-blind Galileo. To salve his ego, Urban ordered that Galileo be made to recant on his knees as "vehemently suspected of heresy." Galileo, now 68, spent the remainder of his life under house arrest, lest the truth escape its biblical prison.

Was Galileo a Christian? It depends on how you define the term. What is certain is that Galileo was a defender of science:

He believed it was a greater heresy to deny the obvious: "It is surely harmful to souls to make it a heresy to believe what is proved" and "It vexes me when they would constrain science by the authority of the Scriptures, and yet do not consider themselves bound to answer reason and experiment."

“Take note, theologians,” wrote Galileo in his Dialogue, “that in your desire to make matters of faith out of propositions relating to the fixity of sun and earth you run the risk of eventually having to condemn as heretics those who would declare the earth to stand still and the sun to change position – eventually, I say, at such a time as it might be physically or logically proved that the earth moves and the sun stands still.”

Galileo believed himself a true son of the Catholic Church, asking only that theology not intrude on science (or faith call itself fact). He saw the possibility of being a Freethinker and a Christian: "God is known by nature in his works, and by doctrine in his revealed word." Still, until the tepid apology by Pope John Paul II in 1992 (L'Osservatore Romano, November 1, 1992), Galileo was remembered by Catholic historians as having done "much to bring upon himself the troubles for which he is now chiefly remembered" — a splendid example of blaming the victim for his own persecution!**

*The Authority of the Scripture in Philosophical Controversies, "In Science." ** The same view is echoed by James Reston Jr. in his Roman Catholic-friendly 1994 biography of Galileo. There is an annotated bibliography of books about Galileo appended to my essay, "The War on Galileo," at this link. More evidence of blaming the victim, from decades ago, can be found in the Journal of the American Scientific Affiliation (David F. Siemens, Jr., JASA 16 (March 1964): 12-15, who quotes Stillman Drake’s biased research), “The arrest, trial and condemnation of Galileo came, not because Galileo and Copernicus came into conflict with Christianity, but because Galileo was arrogantly egotistical and libelously insolent.” The ASA, formed in 1941 by evangelical scientists and creationists, publishes a journal, Perspectives on Science and Christian Faith, which espouses a fundamentalist-evangelical slant on scientific inquiry.