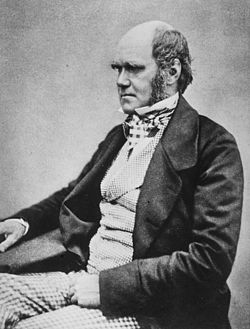 It was on this date, February 12, 1809 (the same date as American politician Abraham Lincoln), that British naturalist Charles Robert Darwin was born in Shrewsbury. He was set to study theology at Christ's College, Cambridge, but gave it up for a chance to study nature aboard the HMS Beagle, during a voyage to Patagonia (South America) and back. The 1831 to 1836 voyage was a life-changing experience for Darwin: his collection and analysis of specimens from nature across a wide area of the earth led to his formulation and publication of the theory of evolution by natural selection.

His preliminary publications resulted in his becoming secretary of the Geological Society (1838-41). At last, twenty-three cautious years of study and collection after he returned from the Beagle voyage, Darwin published the first edition of The Origin of Species (1859). Naturalist T.H. Huxley published in his Man's Place in Nature (1863), applying Darwin's theory to humanity, and Darwin followed in 1871 with The Descent Of Man.

The response in the scientific community was electric. But in the religious community, where accepting Darwin's theories was tantamount to rejecting divine creation, the response ranged from dismissive to panic-stricken. Andrew D. White devotes several chapters in his Warfare to the theological opposition to the science that is now the bedrock of biology.[1] Darwin's own religious views evolved from a passable piety to deep skepticism. In an 1873 letter to a Dutch student, Darwin wrote,

I am aware that if we admit a first cause, the mind still craves to know whence it came, and how it arose. Nor can I overlook the difficulty from the immense amount of suffering through the world. ... The safest conclusion seems to me that the whole subject is beyond the scope of man's intellect; but man can do his duty.[2]

In an autobiographical essay written in 1876, Darwin admitted,

By further reflecting that the clearest evidence would be requisite to make any sane man believe in the miracles by which Christianity is supported ... I gradually came to disbelieve in Christianity as a divine revelation.
... I was very unwilling to give up my belief ... But I found it more and more difficult, with free scope given to my imagination, to invent evidence which would suffice to convince me. Thus disbelief crept over me at a very slow rate, but was at last complete. The rate was so slow that I felt no distress. ...
I cannot pretend to throw the least light on such abstruse problems. The mystery of the beginning of all things is insoluble by us; and I for one must be content to remain an Agnostic.[3]

What my own views may be is a question of no consequence to any one but myself. But, as you ask, I may state that my judgment often fluctuates... In my most extreme fluctuations I have never been an Atheist in the sense of denying the existence of a God. I think that generally (and more and more as I grow older), but not always, that an Agnostic would be the more correct description of my state of mind.[4]

Darwin died in Down, Kent, on 19 April 1882 and was buried in Westminster Abbey. In spite of the story circulated by evangelist Lady Elizabeth Hope, Darwin did not renounce evolution on his deathbed. Darwin's daughter Henrietta stated, "I was present at his deathbed ... He never recanted any of his scientific views, either then or earlier." Charles Darwin's last words, according to his eldest son Francis, were "I am not the least afraid to die."[5]

Mann believed in an impersonal God but rejected immortality. The Dictionary of American Biography described him as "a Puritan without a theology."