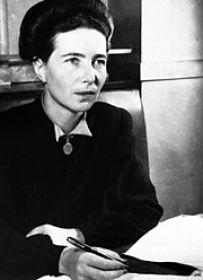 It was on this date, January 9, 1908, that French existentialist philosopher Simone de Beauvoir was born Simone Lucia Ernestine Marie Bertrand de Beauvoir in Paris. Rejecting her mother's Roman Catholicism, she became an Atheist as a teenager and graduated from the Sorbonne in 1929, after giving a presentation on Leibniz. Shortly thereafter, de Beauvoir met her life-long companion and fellow existentialist, Jean-Paul Sartre, having taken second place on the final exam to Sartre’s first – and distinguishing herself, at age 21, as the youngest person, male or female, to achieve the aggrégation in philosophy.

Her most famous work, The Second Sex (1949), delves into the historic oppression of women as a feminist take on existentialism. "Christianity gave eroticism its savor of sin and legend when it endowed the human female with a soul," de Beauvoir said, referring to when the Council of Nicea, by a single vote, declared women to be human.

Her other works include a prize-winning novel, The Mandarins (1954), which, along with The Second Sex, was banned by Roman Catholic authorities. "I cannot be angry at God, in whom I do not believe," de Beauvoir once said to the London Observer.*

Her relationship with Sartre lasted 50 years, until his death in 1980. But though he asked her several times, she refused to marry him and did not live with him. De Beauvoir's last words on Sartre's death were, "My death will not bring us together again. This is how things are. It is in itself splendid that we were able to live our lives in harmony for so long."** Simone de Beauvoir herself died at age 78 in Paris on 14 April 1986. She was buried at the Montparnasse Cemetery alongside Sartre.