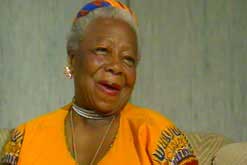 Butterfly McQueen in her later years

It was on this date, January 8, 1911, that actress Thelma "Butterfly" McQueen was born in Tampa, Florida, the daughter of a stevedore and a domestic worker. Although she was raised a Christian, she began to question the value of organized religion as a child. She gave up her study of nursing to become an actress and dancer in New York and achieved some measure of success. She won her nickname, "Butterfly," in the Butterfly Ballet sequence of Harlem Theater group's 1935 Midsummer Night's Dream, perhaps as a tribute to her fluttering hands.

McQueen's stage and screen career tracks the way many blacks were treated in Hollywood and elsewhere in America from the 1920s through the 1950s. Few screen roles for black actresses were available and, when they were, the characters were invariably personifications of how racist white society saw Americans of African descent. McQueen's first film role was uncredited: she played Lulu, the cosmetics counter maid in the 1939 film The Women.

She auditioned for David Selznick's Gone With The Wind, but was initially rejected for the role of Prissy as too old (at age 28), too heavy and too dignified. Yet as the whiny, incompetent house slave, McQueen stole every scene she was in, and immortalized the line, "I don't know nothin' 'bout birthin' babies!" 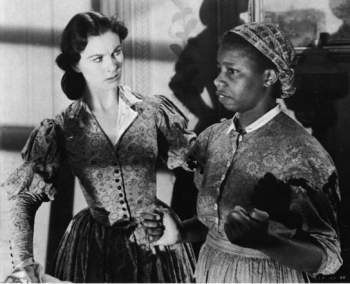 "It was not a pleasant part to play," McQueen said. "I didn't want to be that little slave. But I did my best, my very best." Although her performance was well noted, McQueen didn't become a hot property in Hollywood. She was offered more maid roles, including Lottie in Mildred Pierce (1945) — but the role was uncredited. The Prissy role did little to further equal participation in society for black people, yet the available roles in film, and later on TV, rarely broke through the stereotype.

McQueen left the screen in 1950, working variously as a real-life maid, a waitress, a receptionist, a dance instructor, and a taxi dispatcher, with only occasional acting jobs. She returned briefly in 1974 and thereafter in TV roles, received a political science degree in 1975 (at age 64), and played Ma Kennywick in the 1986 film Mosquito Coast. She died of injuries suffered in a kerosene-heater accident at her Augusta, Georgia, home on 22 December 1995.

It is little known that Butterfly McQueen was a life-long Atheist. "As my ancestors are free from slavery," she said, "I am free from the slavery of religion."* The Freedom from Religion Foundation (FFRF) honored her as a "Freethought Heroine" in 1989 — the same year in which she was recognized during the 50th anniversary of Gone With the Wind. She had been an FFRF member since 1981 and remembered the organization in her will.

In remarks at the FFRF Convention in Atlanta, McQueen said, "If we had put the energy on earth and on people that we put on mythology and on Jesus Christ, we wouldn't have any hunger or homelessness." Christianity and studying the bible has, she said, "sapped our minds so we don't know anything else." She said she tithed not to religion but "to my friends," spending her energy cleaning up the slums.

After her death, a Christian neighbor inconsiderately mused, "I believe she made it into heaven. She threw up both her hands as she was coming out of that burning house, and made it in with Jesus." But it was Butterfly McQueen who said,

They say the streets are going to be beautiful in heaven. I'm trying to make the streets beautiful here. At least, in Georgia and in New York, I live on beautiful streets. ... When it's clean and beautiful, I think America is heaven. And some people are hell.**