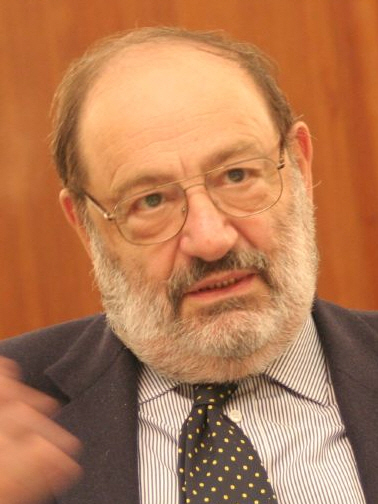 It was on this date, January 5, 1932, that Italian philologist and writer Umberto Eco was born in Alessandria, in the Italian province of Piedmont. He works as a professor of semiotics at the University of Bologna, teaching the study of signs and their interpretation, and their function in syntax, semantics and literary theory. Eco is best known for his novel The Name of the Rose (1983), which was made into a 1986 film. The novel is a medieval murder-mystery in which one prominent character argues that God abhors laughter.

Eco claimed he wrote The Name of the Rose because "I felt like poisoning a monk." What does he think of religion? After publishing, Belief or Nonbelief? A Confrontation (2000), Eco was interviewed by Nora Gallagher for a Los Angeles Times review.

Elsewhere, Eco has written, "Fear prophets and those prepared to die for the truth, for as a rule they make many others die with them, often before them, at times instead of them." And, "A dream is a scripture, and many scriptures are nothing but dreams." And, "But now I have come to believe that the whole world is an enigma, a harmless enigma that is made terrible by our own mad attempt to interpret it as though it had an underlying truth."

Eco died of pancreatic cancer on 19 February 2016 at age 84. It was Umberto Eco who wrote what may be true of even the Christian Bible, "Books are not made to be believed, but to be subjected to inquiry."