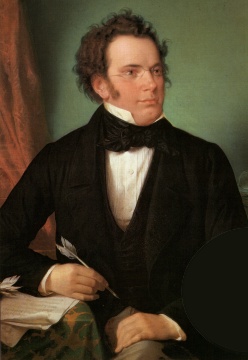 It was on this date, January 31, 1797, that Austrian composer Franz Schubert was born Franz Peter Schubert in Vienna. He studied the violin from age eight and the pianoforte after that, composing his first piano duet before he turned 14. Two of his songs so impressed Antonio Salieri, that the composer sought out Schubert and taught him harmony. But probably Schubert's most popular work, after his songs "The Erlking" and "The Wanderer," remains incomplete: the Unfinished Symphony in B-Minor (No. 8, D.759).* Schubert also wrote an unfinished oratorio, Lazarus, and 17 unmemorable operas, but a great body of religious music. These included three Masses among other sacred music.

The Catholic Encyclopedia, always eager to claim Catholic inspiration for art, makes much of Schubert's service to church music. The writer of the article waxes enthusiastic about the raptures of faith that must have inspired Schubert's Mass in C, Mass in G, Mass in A flat, Benedictus, Stabat Mater and Salve Regina. In truth, like Beethoven and Mozart, Schubert was a skeptic. Sir George Grove, in his standard Dictionary of Music and Musicians, says, "of formal or dogmatic religion we can find no trace,"** in Schubert's short life. Of creeds and churches he quotes Schubert saying, "Not a word of it is true."

Franz Schubert died in Vienna on 19 November 1829, but his reputation increased posthumously through advocacy by Liszt, Schumann, and Mendelssohn. Even if Schubert had "no external connection with the Church," as his Catholic biographer admits, what of his incomparably beautiful Ave Maria? As another biographer pointed out, "One might as well say that all the artists who painted beautiful Venuses must have believed in the goddess."

* The Unfinished Symphony gave some anonymous wag occasion to criticize managed health care in the US:

“1. For a considerable period, the oboe players had nothing to do. Their number should be reduced, and their work spread over the whole orchestra, avoiding peaks of inactivity.
“2. All 12 violins were playing identical notes. This seems an unneeded duplication, and the staff of this section should be cut. If a volume of sound is really required, this could be accomplished with the use of an amplifier.
“3. Much effort was involved in playing the 16th notes. This appears to be an excessive refinement, and it is recommended that all notes be rounded up to the nearest 8th note. If this were done it would be possible to use para-professionals instead of experienced musicians.
“4. No useful purpose is served by repeating with horns the passage that has already been handled by the strings. If all such redundant passages were eliminated then the concert could be reduced from two hours to twenty minutes.
“5. The symphony had two movements. If Mr. Schubert didn’t achieve his musical goals by the end of the first movement, then he should have stopped there. The second movement is unnecessary and should be cut.
“In light of the above, one can only conclude that had Mr. Schubert given attention to these matters, he probably would have had time to finish the symphony.”
** George Grove, Grove's Dictionary of Music and Musicians, ed. by J.A. Fuller Maitland, New York: Macmillan, 1904-1910, 5 vols., vol. IV, p. 634.

Bill Gates (1955) It was on this date, October 28, 1955, that the entrepreneur who became chairman and CEO of Microsoft Corporation, the world's largest software firm, Bill Gates, was born in Seattle, Washington. Born William Henry Gates III, Bill Gates was an exceptional student. After co-founding Microsoft with friend Paul Allen, Gates used quasi-legal […]