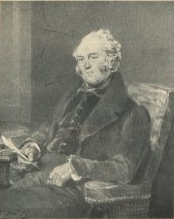 It was on this date, January 30, 1775, that English satirist and writer Walter Savage Landor was born in Ipsley Court, Warwick, the son of a doctor who married a woman of wealth. A bit of an unruly youth, Landor was removed from Rugby for insolence and suspended from Trinity College, Oxford, for firing off a shotgun in his rooms. But after inheriting the family property in Staffordshire, at age 33 (1808) he volunteered for and fought in the Spanish War of Liberation against the French, paying his own way.

Landor's unrestrained personality got him sued for libel, so he moved to Italy with his wife and, in 1824, published his Imaginary Conversations of Literary Men and Statesmen (1824-29). This work, with its criticism of his host country, plus a charge of insulting the police, got Landor threatened with expulsion from Florence. He returned to England voluntarily in 1835 with his wife and (now) a family of four children. There he published Pericles and Aspasia (1836), a series of imaginary letters recreating Athens and its civilization through the lives of the distinguished Greek statesman and the most learned woman of the Greek world — both of them advanced skeptics.

In England Landor also befriended Charles Dickens, another theist who doubted Christianity, as well as future Dickens biographer John Forester. Dickens would represent Landor's eccentricities of character as Boythorn in his novel Bleak House (1853). But because of an 1858 libel case, prompted by Landor's publication of some satirical verses characterizing a local woman — "Dry Sticks, Fagoted by Walter Savage Landor" — he fled again to Italy, taking up residence with Elizabeth Barrett and Robert Browning.

Landor, a writer then sitting in the front rank of his contemporaries, supported the socialist ideals of George Holyoake (1817-1906) and was a firm fighter for freedom with his popular pen. Although he said, "A solitude is the audience-chamber of God," Landor was a theist with a strong disdain of Christianity. Indeed, he also pointed out, "Every sect is a moral check on its neighbour. Competition is as wholesome in religion as in commerce" and "Even the weakest disputant is made so conceited by what he calls religion, as to think himself wiser than the wisest who thinks differently from him."

Does any one believe that all the English and Irish and Welsh bishops, in a body, have more christianity, more wisdom, more knowledge of theology, more eloquence to enforce it, than Robert Hall? It was his opinion, it was also Milton's (and other men equally wise and pious have assented to it,) that the union of Church and State is injurious, not only to civil liberty but to pure religion. Men varying far asunder in theological creeds, have agreed in this; and have shrunk with horrour from that pride, wealth, and stateliness, in the ministers of Christ, which he himself was the first to prohibit and condemn. (#5)

The Church has nothing more to do, within a state, than to apply her seal to moral contracts and engagements. Wherever she does more, she does mischief, and is liable to be thrust out with violence. ... Divorce the Church and State: divorce them; and the one will neither be shrew nor strumpet; the other neither bulley nor cutpurse. (#28)

In another letter** Landor wrote of his disbelief in a life after death. He faced his own death, on 17 September 1864, with the following untroubled profession: "I warmed both hands before the fire of life; It sinks, and I am ready to depart."

* The series of 47 letters is collected under the title, "The letters of a Conservative: in which are shown the only means of saving what is left of the English church." ** George Somes Layard, Mrs. Lynn Linton: Her Life, Letters and Opinions London: Methuen, 1901, p. 123.