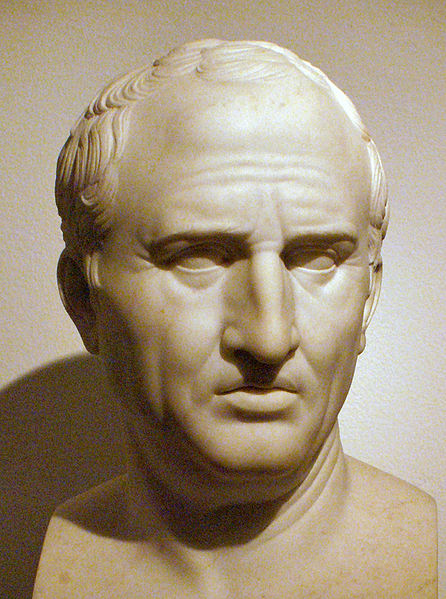 It was on this date, January 3, 106 BCE, that Roman statesman and orator Marcus Tullius Cicero was born in Arpinum, which is modern Arpino, Italy. Having chosen parents not among the ruling class in oligarchic Rome, Cicero rose through the political ranks — quaestor, aedile, praetor, and consul — much as one would today: after distinguishing himself as a lawyer. At the peak of his political career, as Consul, in 63 BCE, Cicero exposed the Catiline conspiracy to overthrow Rome.

Cicero was not only an idealist in morals but an advanced skeptic toward religion. In his rejection of the Roman (pagan) religion, he was followed by many of the educated in Roman society. Though professing to follow Plato's Academic School in philosophy, the school had abandoned dogmatic Platonism by then for something resembling Agnosticism.

Cicero witnessed the fall of the Roman Republic, but his own character demonstrates that Rome was not wholly corrupt. He declined to join in the First Triumvirate, which gave Cicero's enemies an opening to apply an ex post facto law to get him exiled. Banned from politics even after his return from exile (47 BCE), Cicero had much time to reflect on philosophy. His treatise On the Nature of the Gods gives the arguments for and against the existence of God, but like a politician he takes neither side.

Likewise as a politician, Cicero may have adopted only a public profession of belief in immortality: one authority on Cicero says that "the noble hopes of immortality with which he fills his works never come to his mind in his misfortunes and perils; he seems to have expressed them only for the public."*

After the collapse of the First Triumvirate, the crossing of the Rubicon, a civil war, and the murder of Julius Caesar (44 BCE), Cicero made the wrong enemies by bitterly attacking Marc Antony in speeches he called Philippics. The Second Triumvirate agreed on a power-sharing plan and Marc Antony took revenge by ordering the orator's assassination. Belatedly attempting to flee Rome, Cicero was murdered on 7 December 43 BCE. By Antony's order, Cicero's head and his hands were cut off and nailed to the speaker's podium in the Senate as a warning to others.**

* Gaston Boissier, Cicéron et ses amis, (Cicero and His Friends) 1875, p. 59. ** In an poetical postscript, Cicero's son, also named Marcus, became consul in 30 BC under Octavian, who had defeated Antony after the Second Triumvirate collapsed. He got to announce Antony's suicide to the Senate.

Said Einstein, "I believe in Spinoza's God… not in a God who concerns himself with the fates and actions of human beings."