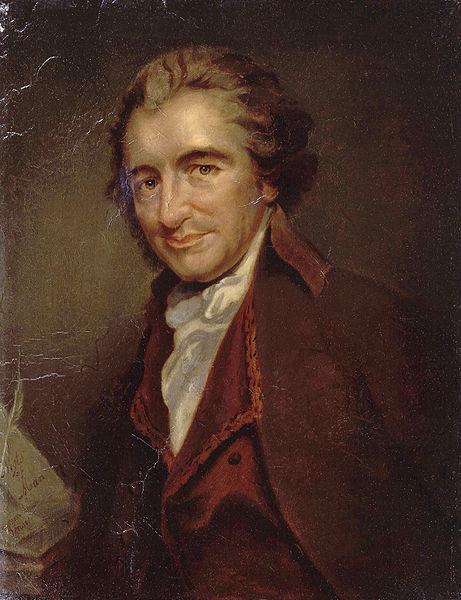 It was on this date, January 29, 1737 (N.S February 9), that English-born American patriot and pamphleteer Thomas Paine was born in Thetford, Norfolk, into an English Quaker family. He worked as a stay-maker for women's dresses, and as an excise-man, but in London Benjamin Franklin persuaded the budding writer to emigrate to America.

As a soldier in George Washington's army, Paine witnessed the struggle for independence for himself and penned Common Sense, which made him so popular that the title became Paine's nickname. The first number of The Crisis, which begins, "These are the times that try men's souls," appeared in January 1776. His writing was so powerful, Washington had The Crisis read to his troops for motivation. The pamphlet sold 120,000 copies in three months.

In recognition of his service to the American Revolution, Congress and the State of New York voted him a grant of property in New Rochelle, New York. Paine returned to London to sell an iron bridge he invented — and his defense of the French Revolution against Burke, The Rights of Man (1791-92). The British government was not captivated by his prose, so Paine fled to Paris. When he courageously voted against the execution of King Louis XVI, Robespierre threw him into prison (28 December 1793).

On his way to prison, Paine handed to his friend and fellow Deist, Joel Barlow, the manuscript of the first part of his Age of Reason, a defense of Deism in the form of a devastating critique of fundamentalist Christianity. While in prison, he completed the second part. In this work, Paine wrote,

I believe in one God, and no more; and I hope for happiness beyond this life. I believe in the equality of man; and I believe that religious duties consist in doing justice, loving mercy, and endeavoring to make our fellow-creatures happy.

Narrowly escaping the guillotine, Paine was released with the intervention of future president James Monroe on 4 November 1794. He returned to a nation that had forgotten all his service to American independence and instead reviled him in the press and insulted him in the streets for his honest opinions in The Age of Reason. If Americans generally behaved toward Paine more like the Old Testament God than the New Testament Jesus, his abandonment by his friends in the government, particularly George Washington, was shameful.

Advocating a liberal worldview, Paine's radical ideas made no room for royalty, and viewed government as a necessary evil, dependent on the will of the people. He was an early opponent of slavery (African Slavery in America, 1775) and was an early supporter of social security (Agrarian Justice, 1796) and general public education, reforms which would not be realized for many years. But Paine's final years were the depressed and desperate ones of a social outcast. He died alone on 8 June 1809, and his remains, first interred in New Rochelle, NY, were transported to England by radical journalist William Cobbett, but lost after Cobbett’s own death, without being reburied there as Cobbett had planned. Paine's writings, political and religious, have influenced Abraham Lincoln, Thomas Edison, and generations of others.

It was Thomas Paine who wrote, in a French prison and anticipating his own death,

The opinions I have advanced... are the effect of the most clear and long-established conviction that the Bible and the Testament are impositions upon the world, that the fall of man, the account of Jesus Christ being the Son of God, and of his dying to appease the wrath of God, and of salvation by that strange means, are all fabulous inventions, dishonorable to the wisdom and power of the Almighty; that the only true religion is Deism, by which I then meant, and mean now, the belief of one God, and an imitation of his moral character, or the practice of what are called moral virtues — and that it was upon this only (so far as religion is concerned) that I rested all my hopes of happiness hereafter. So say I now — and so help me God. (Age of Reason)

NB: Full-text versions of Paine's works can be found at the following links:

The Rights of Man

The author has also made a four-hour recording of The Age of Reason for Originally published January 2004 by Ronald Bruce Meyer.

"Though he remains an agnostic," McCabe write of his personal relationship with Phillpotts, "in recent years he has become milder and more conservative."