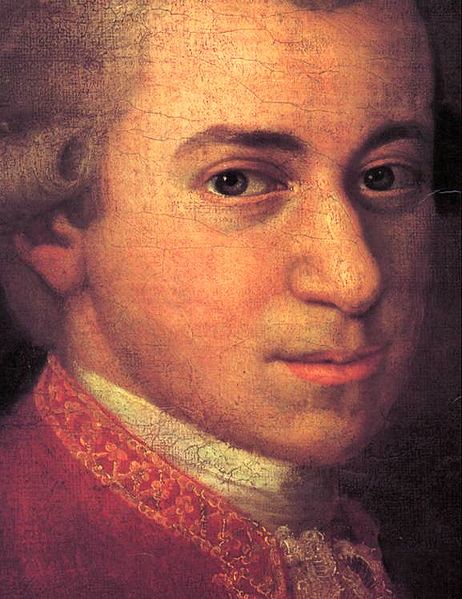 It was on this date, January 27, 1756, that Austrian composer Johann Chrysostom Wolfgang Theophilus Mozart, who became famous as Wolfgang Amadeus Mozart, was born in Salzburg. His father, the Catholic musician Leopold Mozart, was a court favorite and professional violinist in Salzburg. His patron encouraged the careers of Leopold’s precocious children, and Wolfgang and his sister “Nannerl” (Maria Anna) both became accomplished pianists before age ten. Wolfgang began composing at age five, played for royalty at age six during a European concert tour, and composed his first opera by age twelve.

In 1770, Pope Clement XIV made Mozart a Knight of the Golden Spur. But his years as concertmaster for the Archbishop of Salzburg were not happy ones. Mozart felt insufficiently recognized for his talent, and the Archbishop accused him of neglect of religion. The composer sought appointments elsewhere, joined the Freemasons (1784), and settled in Vienna. Masonic teachings affected his thinking and his compositions from that time on.

For his 35 years of life, and his persistent ill-health, Mozart's body of work was prodigious: some 40 symphonies, numerous concertos, including 27 for piano and five for violin, much sacred choral music, including 18 masses and the unfinished Requiem (K.626, 1791), chamber music, including 23 string quartets, serenades, such as Eine kleine Nachtmusik (K.525, 1787), keyboard music, including 17 piano sonatas, and two-dozen operas, including Idomeneo (1781), The Abduction from the Seraglio (Die Entführung aus dem Serail, 1782), The Marriage of Figaro (Le nozze di Figaro, 1786), Don Giovanni (1787), Cosí fan tutte (1790) and The Magic Flute (Die Zauberflöte, 1791).

Although Mozart composed memorable church music, even the Catholic Encyclopedia, while claiming him as one of the faithful, laments that these compositions

do not reflect the spirit of the universal Church, but rather the subjective conception and mood of the composer.... What Mozart, with his Raphaelesque imagination and temperament, would have been for church music had he lived at a different time and in different surroundings, or risen above his own, can easily be imagined.

In fact, like Beethoven, Mozart was an apostate from the Church. His membership in the Freemasons would not have been approved (they were banned by the Pope), and several of his biographers note his dismissive attitude toward Catholicism. Victor Van Wilder's biography shows us a 1778 letter Mozart wrote to his family, saying he believes only in the Grand Architect of the Freemasons.* Another biographer, Alexander Ulibischeff, quotes Mozart recalling, "The orthodoxy of my youth is all over and will never come back."**

As he lay dying, his wife Constanze sent for a priest, without Mozart's permission, but none came. He died on 5 December 1791, probably from kidney failure, without a cleric in attendance. There was a cheap funeral at Saint Stephen's Cathedral, and Mozart was buried in an unmarked grave in a Viennese suburb — such an arrangement being legally required for Viennese of the lower classes.

You can search in vain for any more religious inspiration in Mozart's Requiem than can be found in his Little Night Music, Magic Flute or Jupiter Symphony. Even when Mozart claims to be a believer, it is not as an orthodox Catholic. When he writes to his father —

...take assurance that I certainly am religious, and if I should ever have the misfortune (which God will forefend) to go astray, I shall acquit you, best of fathers, from all blame. I alone would be the scoundrel; to you I owe all my spiritual and temporal welfare and salvation.†

— far from proving Catholic piety, Mozart seems not only to have given his father cause to doubt it, but seems to portray himself as a non-Christian theist.

NB: A correspondent complained about my argument that Catholicism was irrelevant to Mozart’s music. I replied that Mozart having understood the fundamentals of Catholicism is irrelevant to judging whether or not he believed in them. Nobody ever died for appearing to agree with the prevailing religious belief. Indeed, many have prospered, whatever their personal beliefs, from catering to the prevailing belief and “sucking up” to those in power — especially when those in power pay good money for good music. That the people with money just happened to be clerics, or kings who liked religious music, does not in any way logically require the creator of that music to be a believer. Mozart was not an orthodox Catholic by contemporary standards. We have to believe the Archbishop who accused him of neglect of religion in his youth. I don’t know what you mean by “Catholic music”: music is music; it is either good or bad. Almost all of Mozart’s music is good and the inspiration for it was both the composer’s love of music and the money he was paid for it. As I said in my essay, “You can search in vain for any more religious inspiration in Mozart's Requiem than can be found in his Little Night Music, Magic Flute or Jupiter Symphony.” Mozart also believed in getting paid for his work. And without his talent and training Mozart could have believed in Jesus more than Augustine did, but he wouldn’t have written a line of memorable music, much less been paid for it. And we wouldn’t be having this conversation about him.