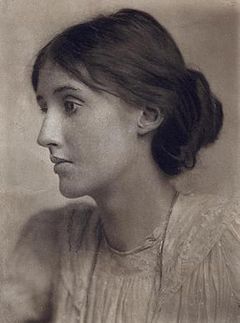 It was on this date, January 25, 1882, that British novelist Virginia Woolf was born Adeline Virginia Stephen in London. She was the daughter of Julia Jackson Duckworth, a member of the Duckworth publishing family, and Sir Leslie Stephen, the literary critic and founder of the Dictionary of National Biography. Not only was she educated at home, in the bookish atmosphere of her literary father and publishing mother, but Virginia's famous father — whose first wife was Thackeray's daughter — was friends with Henry James, Matthew Arnold, George Meredith, Lord Tennyson, and George Eliot. "Think how I was brought up!" wrote Virginia to her friend, Vita Sackville-West, "No school; mooning about alone among my father's books; never any chance to pick up all that goes on in schools — throwing balls; ragging; slang; vulgarities; scenes; jealousies!"

Virginia gave little thought to religion, generally: "I like the Roman Catholic religion," she wrote. "I say it is an attempt at art."[1] Biographer James King notes that Virginia "always remained a great admirer of the aesthetics of Roman Catholicism...,"[2] an attitude that is characteristic of those, such as Oscar Wilde, to whom Church doctrines are repugnant: "Although she hated the arrogance of Christianity," writes King, "she remembered that she had always been fond of its ceremonies."[3]

From the beginning, Virginia was troubled: Her mother died when she was in her early teens, her half sister died two years later, her father finally succumbed to cancer in 1904, and she was sexually molested by her half-brother Gerald Duckworth. When her brother Toby died in 1906, Virginia had a mental breakdown.

Virginia began to write for the Times Literary Supplement in 1905, married critic and writer Leonard Woolf in 1912, and published her first book, The Voyage Out in 1915. Virginia Woolf was the central figure of the Bloomsbury Group and established herself as one of the leading feminist and modernist writers between the wars with To The Lighthouse (1927) and The Waves (1931). She self-published with her husband through Hogart Press.

Woolf's other major works include Mrs. Dalloway (1925), Orlando (1928), a fantasy in which a male character in the Elizabethan court becomes a female character in the present (i.e., 1928), A Room of One's Own (1929), which Woolf explained thus: "A woman must have money and a room of her own if she is to write fiction," and about 500 essays.

Rarely does Woolf touch on religion in her novels and essays, but in her letters she is more candid. In a 1936 letter to Vita Sackville-West (after whom Woolf modeled the Orlando character), Woolf reflects on French peasant faith in West's St. Joan of Arc (1936), saying, "...they believed where we cant. Or rather, our belief is hardly perceptible to us, but will be to those who write our lives in 600 years. ... I agree, we do believe, not in God though: not one anyhow. ... Perhaps I mean, belief is almost unconscious. And the living belief now is in human beings."[4]

In a letter to Dame Ethel Smith, written while listening to a December 26 BBC broadcast, Woolf wrote, "A man breaks in from the cave where Christ was born. How repulsive the Xtian [sic] religion as conveyed by the Xtian clergyman is..."[5]. And to the same correspondent, three years later, Woolf found herself "reflecting upon my lack of what you possess — faith;" and asking "how much more pervious to preaching your faith makes you than my lack?"[6]

After her final attack of mental illness, on 28 March 1941 Virginia Woolf weighted her pockets with rocks and drowned herself in the River Ouse by her Sussex home. She was already immortal at 59.