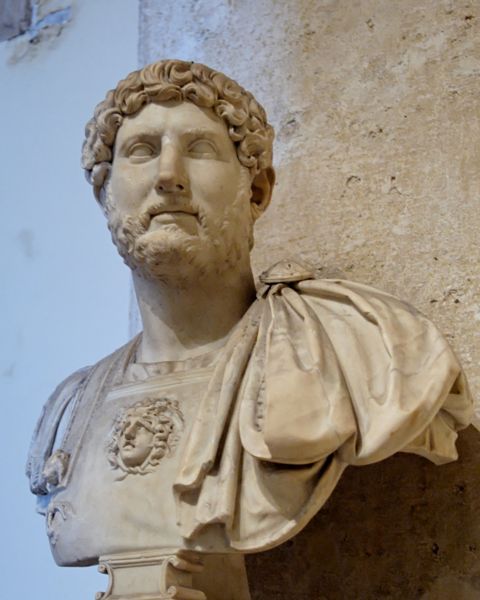 It was on this date, January 24, 76 CE, that the Roman Emperor Hadrian was born in Rome, or perhaps in Spain. From a successful military career, and a quick rise through the political elite of Rome, Hadrian became the adopted son of Emperor Trajan and succeeded him as Emperor, with the help of Trajan's wife, Plotina, on 11 August 117.

The Stoic-Epicurean Emperor traveled broadly, inspecting and correcting the legions in the field. At home he attended to social needs. Hadrian mitigated but did not abolish slavery, had the legal code humanized and forbade torture. He built libraries, aqueducts, baths and theaters. Hadrian is considered by most historians to have been wise and just: Schiller called him "the Empire's first servant," and Edward Gibbon admired his "vast and active genius," as well as his "equity and moderation."*

At his imperial villa at Baiae, on the Bay of Naples, Hadrian died on 10 July 138. This poem, written shortly before his death, expresses Hadrian's religious skepticism:

Little soul, wandering and pale,
Guest and companion of my body,
You who will now go off to places
Pale, stiff, and barren,
Nor will you make jokes as has been your wont!

* Edward Gibbon, The Decline and Fall of the Roman Empire, vol. I, 1776; also, Bernard W. Henderson, Life and Principate of the Emperor Hadrian, 1923; Anthony R. Birley, Hadrian, The Restless Emperor, 1997.

“No man shall be compelled to frequent or support any religious worship, place, or ministry whatsoever… All men shall be free to profess, and by argument to maintain, their opinions in matters of religion.”