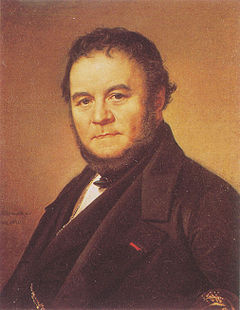 It was on this date, January 23, 1783, that the French novelist known as Stendhal was born Marie-Henri Beyle in Grenoble. He hated the Jesuit education provided by his pious aunt, so Beyle moved to Paris to study and to write. When the French Empire fell in 1814, he moved to Italy, which resulted in several love affairs and the travel book Rome, Naples et Florence en 1817 (1817), for which he first used his pen-name, Stendhal.

Suspected of spying, Stendhal returned to Paris in 1821 to became a major novelist. His most famous works are The Red and the Black (Le Rouge et le noir, 1830), about political and social conditions in France, and The Charterhouse of Parma (La Chartreuse de Parme, 1839). Praise from Flaubert and Balzac enhanced Stendhal's reputation.

Having seen its influence in Paris and as French consul in the Papal States, Stendhal was able to say, "All religions are founded on the fear of the many and the cleverness of the few."* A few hours after collapsing with a seizure on the streets of Paris, Stendhal died on 22 March 1842. Prosper Merimée's memoir of Stendhal, published after his death, quotes the novelist saying, "The only excuse for God is that there is no such person" ("Ce qui excuse Dieu c'est qu'il n'existe pas").**

“Dissent is the mark of freedom,” wrote Bronowski, “These freedoms of tolerance have never been notable..., even when the dogma was Christian. Has there ever been a society which has died of dissent? Several have died of conformity in our lifetimes.”