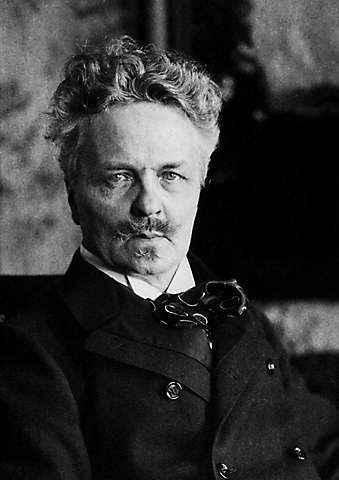 It was on this date, January 22, 1849, that Swedish dramatist and novelist Johann August Strindberg was born in Stockholm. From a poor childhood and a poor showing at the University of Uppsala, Strindberg made his reputation with his first published novel, a dramatization of the excesses of Stockholm capitalism, Red Room (Röda Rummet, 1879).His second attempt to mount the historical drama Master Olof (Mäster Olof, 1872) met with success in 1881. But his play criticizing official Swedish history, Svenska Folket (1880-82), was reviled by the profession and eventually persuaded Strindberg to move to France with his family (1883). The next year, his Getting Married (Giftas, 1884-85) outraged the guardians of virtue with his critique of married life.

Strindberg's criticisms frequently included the church. A novella called The Eward of Virtue included an unorthodox description of the Last Supper, for which Strindberg was charged with blasphemy. He was acquitted in spite of some passages that were virulently anti-Christian. During his productive life Strindberg was an Atheist, but between 1892 and 1897 he began having psychotic episodes. He became a follower of Emmanuel Swedenborg, but his mental health deteriorated and he turned to mysticism in his later years. Strindberg died on 14 May 1912.