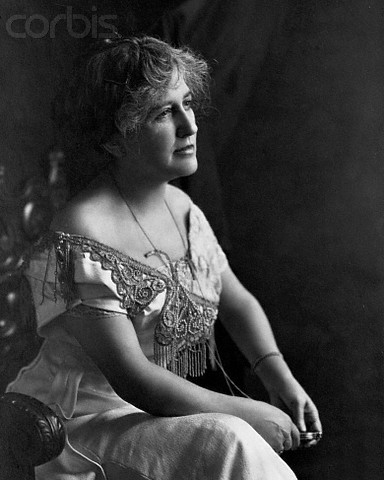 It was on this date, January 21, 1853, that Helen Hamilton Gardener was born Alice Chenoweth in Winchester, VA, the daughter of a clergyman. She graduated from the Cincinnati (Ohio) Normal School in 1873 and was a schoolteacher for two years until she married Charles S. Smart. The couple moved to New York City in 1880, where Alice Smart came under the influence of the famous freethinker Robert Ingersoll. She began writing for newspapers and delivering a series of lectures on Freethought topics, then published them in 1885 as Men, Women, and Gods, and Other Lectures, using the name Helen Hamilton Gardener.

She kept the name and rose to fame as one of a vanguard of Freethinkers among American feminists of the second half of the 19th century. Gardener traveled through thirty countries as a lecturer, especially on social issues: in her Facts and Fictions of Life (1893), she blasted the popular neurological fancy that the female brain is inherently inferior to the male brain.

It teaches that a man may have any number of wives; that he may sell them, give them away, or swap them around, and still be a perfect gentleman, a good husband, a righteous man, and one of God's most intimate friends... It teaches almost every infamy under the heavens for woman, and it does not recognize her as a self-directing, free human being. It classes her as property, just as it does a sheep: and it forbids her to think, talk, act, or exist, except under conditions and limits defined by some priest.

[T]here is no book which tells of a more infamous monster than the Old Testament, with its Jehovah of murder and cruelty and revenge, unless it be the New Testament, which arms its God with hell, and extends his outrages throughout all eternity! ... It is thought strange and particularly shocking by some persons for a woman to question the absolute correctness of the Bible. She is supposed to be able to go through the world with her eyes shut, and her month open wide enough to swallow Jonah and the Garden of Eden without making a wry face. ... This religion and the Bible require of woman everything, and give her nothing. They ask her support and her love, and repay her with contempt and oppression.

Commenting on Matthew 15:26, in which Jesus denied the request of a Gentile woman to heal her sick daughter, telling her, "It is not meet to take the children's bread and cast it to the dogs," Gardener writes:

Do you think that was kind? Do you think it was godlike? What would you think of a physician, if a woman came to him distressed and said, "Doctor, come to my daughter, she is very ill. She has lost her reason, and she is all I have!" What would you think of the doctor who would not reply at all at first, and then, when she fell at his feet and worshiped him, answered that he did not spend his time doctoring dogs? ... Do you think that a man who could offer such an indignity to a sorrowing mother has a perfect character, is an ideal God?

In 1920, Helen Hamilton Gardener was appointed by President Woodrow Wilson the first woman on the U.S. Civil Service Commission. She served there until her death, on 26 July 1925, in Washington, DC.

This Week in Freethought History (April 1-7)

(The following is a transcript of a broadcast by John Mill, the radio persona of Ronald Bruce Meyer. “This Week In Freethought” airs on the American Heathen® internet radio show, Saturdays 8:00pm-11:00pm ET on ShocknetRadio.com. Air date of this particular segment: 04/07/12) Here’s your Week in Freethought History: This is more than just a calendar […]