It was on this date, January 20, 1953, that the "Piltdown Man" fossils — found in the village of Piltdown, near the Sussex town of Lewes — were admitted to be a hoax. Touted by its discoverer, Charles Dawson, and its chief defender, paleontologist Sir Arthur Keith, as the long-sought "missing link" between ancient and modern hominids, Piltdown turned out to be a small hoax that took on a life of its own — for 45 years — because the chief hoaxer died before he could confess!

One of the earliest hominids, or human ancestors, Neanderthal Man, was discovered in 1856, three years before Darwin published his shocking Origin of Species. Ten years after that (1869), Cro Magnon Man was discovered, followed two years later by Darwin's Descent of Man. Thirty-seven years later, between 1908 and 1917, amateur archaeologist Dawson, along with Jesuit scientist Pierre Teilhard de Chardin (1881-1955), and Sir Arthur Smith Woodward (1864-1944), teamed up to dig up the bones. 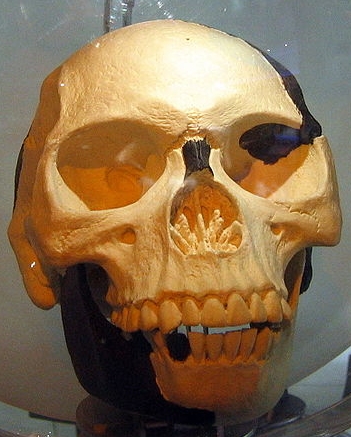 What they turned up were two Piltdown skulls: one a human skull fragment about 620 years old, with a 500-year-old orangutan jaw; a second skull fragment from medieval times, along with a second 500-year-old jawbone , probably from Sarawak, Malaysia; and three teeth. One tooth was an elephant molar, probably from Tunisia; one a hippopotamus tooth from Malta or Sicily; and a canine tooth, from a Pleistocene-era chimpanzee.

How did Eoanthropus Dawsoni fool scientists for so long? The initial testing brought onboard many scientists with credentials as good as or better than Chardin's and Woodward's. But there were fortunate circumstances in the second decade of the 20th century that kept the find flourishing.

Very few genuine hominid fossils had been discovered up to World War I, so camparison was difficult. Dating tests were almost as primitive as the bones themselves. The validation tests that were executed, were incompetently done: the teeth, for example, bore evidence of being filed down. There was confirmation bias among the scientists, who were hoping to find just such a fossil. The three who found the fossils were experts, but Dawson was an amateur archaeologist; Chardin was uncritically pro-evolution; and Woodward's specialty was paleoichthyology, or fossil fish. Dawson, the prime suspect in the hoax, died in 1916. But Woodward, another suspect, defended the find to his dying day (The Earliest Englishman, 1948). So did Teilhard de Chardin, who died in 1955, after the hoax was exposed.

Creationists were quick to gloat over the long-delayed exposure of the Piltdown hoax — even while defending an even larger and longer-running one. Of course it was embarrassing: scientists had not followed their own rules. And although it took 40 years to expose, the error was corrected from within the scientific community, not by Creationists.

So before Creationists get too smug, a few facts are in order. It took Creationists until the 20th century, with significant holdouts, to admit that the Bible chronology was wrong and the geological age of the earth is correct. Even today, fundamentalist Christians believe the Bible is correct when it says that:

• languages were commanded into existence rather than evolving along geographical lines. (Gen. 11:1-9)

NB: Source material includes Ronald Millar, The Piltdown Men, 1972, and Charles Blinderman, The Piltdown Inquest, 1986. The latter source can be found online at this link.

I am well aware that the form of the argument I use against the Creationists (especially those espousing "Intelligent Design" Creationism) is known as tu quoque or "you do it, too." It is a popular argument with Creationists themselves, who can't seem to come up with a coherent alternative theory, but think it is enough to point out supposed weaknesses in the Theory of Evolution. I make this argument in a reply to a critic at this link.

It was on this date, November 4, 1960, that American comedian and actress Kathy Griffin was born Kathleen Mary Griffin in Oak Park, Illinois. At about age 18, she moved to Los Angeles to study drama at the Lee Strasberg Theatre and Film Institute, becoming a member of The Groundlings improvisational comedy troupe like her […]