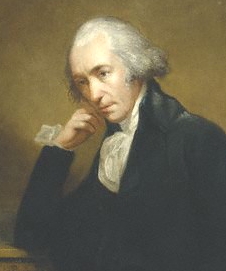 It was on this date, January 19, 1736, that Scottish inventor James Watt was born in Greenock, the son of a merchant. After some education in London, Watt made his reputation as an engineer in Glasgow. He radically improved the steam engine of his day and made such important contributions to industrialization, including coinage of the term "horsepower," that the Dictionary of National Biography says "his many and most valuable inventions must always place him among the leading benefactors of mankind."

Not only did his inventions make him a wealthy man, but Watt was otherwise an accomplished man. He sympathized with the French Revolution — he refused the offer of a baronetcy for his work — and knew Greek, Latin, French, German and Italian. He was friends with the freethinking French scientists Lavoisier and Berthollet. He died in Heathfield, England on 19 August 1819. Sixty-three years after his death, the unit of electrical power was called the Watt. Andrew Carnegie,* in his Life of James Watt (1905), shows that Watt was a Deist and never attended church.

* The full text of the 1905 Andrew Carnegie biography can be found at this link.