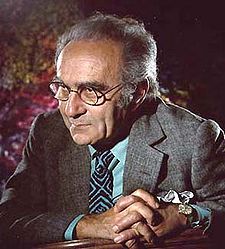 It was on this date, January 18, 1906, that British mathematician Jacob Bronowski was born in Łódź, Poland. Fleeing the Russian conquest of Poland in World War I, the Bronowski family emigrated to Germany, then in 1920 moved to London. Bronowski was known to his friends as "Bruno," and studied mathematics at Jesus College, Cambridge, but by 1928 Bruno had discovered a love for poetry and literature. By 1933, when he received his doctorate and British citizenship, Bruno had already begun a melding of literature and science that was uniquely humanistic.

The next year (1934), he was appointed lecturer in mathematics at University College, Hull, and five years later his first book, The Poet's Defense (1939) "wrestled with the relation between the truth of science and that of poetry," as he put it.

His career achievement, however, was an 18-month project for BBC television called "The Ascent of Man." It was broadcast in 13 parts in 1973 and carried Bruno's philosophy of science and literature to a much wider audience than his books could reach. In it, he said, "Man masters nature not by force but by understanding. This is why science has succeeded where magic failed: because it has looked for no spell to cast over nature."*

Perhaps the clearest statement of Bruno's religion was this:

Dissent is the mark of freedom. And as originality and independence are private needs for the existence of a science, so dissent and freedom are its public needs. The safeguards which it must offer are apparent: free inquiry, free thought, free speech, tolerance. These freedoms of tolerance have never been notable in a dogmatic society, even when the dogma was Christian. Has there ever been a society which has died of dissent? Several have died of conformity in our lifetimes.**

Sadly, the stresses of the "Ascent of Man" series damaged his health. Bruno died of a heart attack on Long Island, New York. It was Jacob Bronowski who said, "You will die but the carbon will not; its career does not end with you. It will return to the soil, and there a plant may take it up again in time, sending it once more on a cycle of plant and animal life."

The Week in Freethought History (September 9-15)

Here’s your Week in Freethought History: This is more than just a calendar of events or mini-biographies – it’s a reminder that, no matter how isolated and alone we may feel at times, we as freethinkers are neither unique nor alone in the world. Last Monday, September 10, but in 1941, “One of the most […]