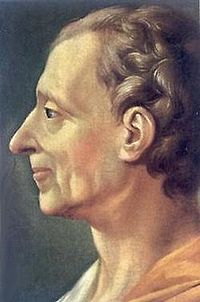 It was on this date, January 18, 1689, that French jurist and nobleman Charles de Secondat, Baron de la Brède et de Montesquieu was born in Bordeaux of a wealthy family. He was educated in science, history and law, and came into his fortune in 1716. He came into fame at age 32 with his Persian Letters (Lettres Persanes, 1721) — in which he wrote, "No kingdom has ever suffered as many civil wars as the kingdom of Christ." — so the clerics whose lifestyles and liberties he criticized called him notorious.

Montesquieu resigned the presidency of the Bordeaux Parlement in 1726, traveled Europe studying law and the people, and penned his famous Spirit of the Laws (L'Esprit des Loi, 1748), which did much to prepare the way for the legal reform of the French Revolution — and which the Pope honored by placing it on the Index of Prohibited Books. Montesquieu was a Deist, and did not directly criticize the Church, but was quietly critical. For example,

Churchmen are interested in keeping the people ignorant. I call piety a malady of the heart. The false notion of miracles comes of our vanity, which makes us believe we are important enough for the Supreme Being to upset nature on our behalf.*

As he lay dying, on 10 February 1755, Montesquieu reluctantly allowed a priest to administer the sacrament, so the Catholic Encyclopedia claims him — even while admitting he was publicly indifferent to religion his entire life.

Newcomb rejected the idea of immortality and made no secret of his Freethinking views. President William Howard Taft attended his funeral.