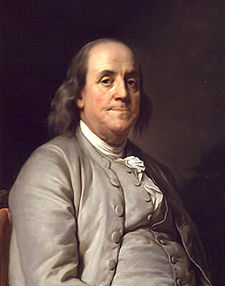 It was on this date, January 17, 1706, that American statesman, scientist, writer, printer and philosopher Benjamin Franklin was born in Boston, Massachusetts. Although his formal schooling was brief, Franklin believed "the doors to wisdom are never shut," and taught himself logic, history, science, algebra, geometry, navigation, English grammar, and could get along in five foreign languages. This served him well in his diplomatic career. As Franklin wrote in his Autobiography,

Some books against Deism fell into my hands. ... They wrought an effect on me quite contrary to what was intended by them; for the arguments of the Deists, which were quoted to be refuted, appeared to me much stronger than the refutations; in short, I became a thorough Deist.[1]

He began as a printer's apprentice to his brother, and published his first pamphlet espousing Deism at the age of twenty. Boston church leaders protested that his writings "mocked religion, brought the Holy Scriptures into contempt, and profanely abused the faithful ministers of God." After working for a time in London, he learned to moderate his public statements and Franklin started a printing shop in Philadelphia because, he said, in Boston he was being "pointed at with horror by good people as an Infidel or Atheist."[2]

The Thomas Edison of his day, Franklin had not only a keen interest in science, he invented the Franklin stove, bifocal eyeglasses and the lightning rod. That lightning rod attracted thunderbolts from pulpits: The Rev. Thomas Prince accused Franklin of defying God and blamed a 1755 earthquake on these "iron points invented by the sagacious Mr. Franklin. ... in Boston are more erected than anywhere else in New England, and Boston seems to be more dreadfully shaken. Oh! there is no getting out of the mighty hand of God."[3] But even churches were eventually persuaded to protect their steeples and spires from "the prince of the power of the air."

Franklin founded the American Philosophical Society, published Poor Richard's Almanack — "The way to see by faith is to shut the eye of reason," he wrote in 1758 — and was appointed Postmaster-General for the Colonies in 1764. He represented the Colonies in London in 1775 and signed both the Declaration of Independence and the U.S. Constitution. Franklin confined his skepticism to his letters and his Autobiography. In one letter he wrote,

When a religion is good, I conceive it will support itself; and when it does not support itself, and God does not take care to support it so that its professors are obliged to call for help of the civil power, 'tis a sign, I apprehend, of its being a bad one.[4]

Benjamin Franklin died on 17 April 1790.* It is useless for clerical writers to try to claim him as a Christian. In a letter he wrote shortly before his death, Franklin confessed,

Here is my creed. I believe in one God, creator of the universe. That he governs it by his providence. That he ought to be worshiped. That the most acceptable service we render to him is doing good to his other children. That the soul of man is immortal, and will be treated with justice in another life. ... As to Jesus of Nazareth, ... I think his system of morals and his religion, ... the best the world ever saw or is like to see; ... and I have, with most of the present Dissenters in England, some doubts as to his divinity; though it is a question I do not dogmatize upon, having never studied it, and think it needless to busy myself with it now, when I expect soon an opportunity of knowing the truth with less trouble....[5]

NB: Benjamin Franklin's epitaph, which he wrote at age 22, reads, "The Body of B Franklin, Printer; Like the Cover of and old Book, Its Contents torn out, And stript of its Lettering and Gilding, Lies here, Food for Worms. But the Work shall not be wholly lost: For it will, as he believ'd, appear once more, In a new & more perfect Edition, Corrected and amended By the Author. He was born Jan 6 1706." The inscription was never used. Instead, his gravestone reads, "Benjamin and Deborah Franklin 1790."