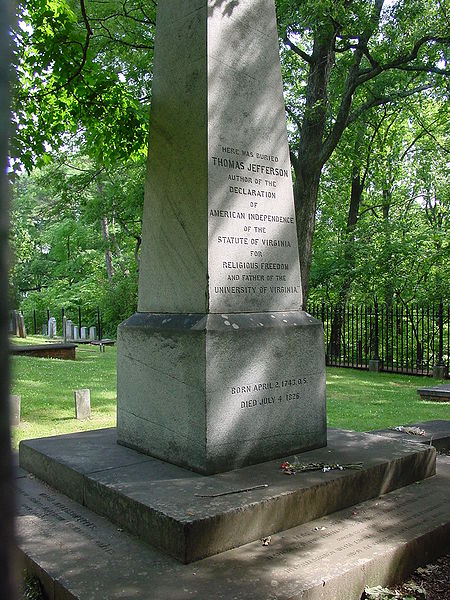 It was on this date, January 16, 1786, that the Virginia Legislature adopted the "Virginia Statute for Religious Freedom." Written by Thomas Jefferson almost ten years earlier as "An Act for Establishing Religious Freedom," and proposed to the legislature when Jefferson became Governor of Virginia in 1779. It took a mighty push from both Jefferson and James Madison – who wrote a "Memorial and Remonstrance Against Religious Assessments" in its support – before the "Virginia Statute for Religious Freedom" had overcame the objections of Patrick Henry and his allies to become law.

Thomas Jefferson, perhaps more than any of the Founders of the United States other than James Madison, believed in freedom of religion as well as freedom from religion. Consequently, the "Virginia Statute for Religious Freedom" guaranteed that no citizen of Virginia would be compelled to attend church, to support the clergy or establishment of any church, or be penalized for failing to do any of those things. Furthermore, the Virginia Statute guaranteed that there would be free and open debate about religion. And these rights were extended not just to Christians, but to religious minorities such as Baptists, Presbyterians, Jews, and even Freethinkers.

The road to passage was a rocky one. Patrick Henry, of "Give me liberty or give me death" fame, was a traditional Anglican. He introduced an alternate bill that gave lip service to the notion that all Christian all denominations be given equal privileges, but demanded that Christianity become the established religion of the Virginia. Establishment was not uncommon in colonial days: in Jefferson's time, nine of the thirteen colonies had an established "official" state religion.

After claiming that the Virginia Statute was unnecessary, anyway, because good men would see that minority religions were not persecuted, Henry and his supporters indulged the classic slander that the Statute was a stealthy attack on religion itself. He called the Statute a "general declamation against all religion." Henry then hyperventilates that the Statute would allow the "legislature of Virginia [to] be held and administered by men professedly atheists, Mahometans [Mohammedans]; or of any other creed, however unfriendly to liberty or the morals of a free country." In a slap at Deists such as Jefferson, Henry goes on to say it is only those who take religion lightly who would fail to institute "a pledge of security to the Christian faith ... interwoven with its political sanctions." At bottom, Henry declares that religion, without constant cash from government, extorted from the people, will not survive.

In fact, what is compelling about the "Virginia Statute for Religious Freedom" is its first section, in which Jefferson waxes philosophical on the "natural right" of religious liberty. Here he says "Almighty God hath created the mind free," and that any attempt to shackle free thought was impious. He goes on to argue that "our civil rights have no dependence on our religious opinions" — anticipating the 1789 Constitution, which forbade religious tests for public office. Jefferson finally enunciates what any believer in "liberty and justice for all" must conclude: "that truth is great and will prevail if left to herself, that she is the proper and sufficient antagonist to error, and has nothing to fear from the conflict."

Jefferson's idealism, with the assistance of Madison's parallel arguments, won the day in Virginia. But not just in Virginia: It should come as no surprise that the "Virginia Statute for Religious Freedom" was the model for the first clause of the First Amendment of the U.S. Constitution!

What enraged the clerics of Dickens' day was not capitalist excess, but that Dickens took Christ out of Christmas. Scrooge is shamed into changing his narrow, grasping, capitalist ways by being shown for the first time their human cost.