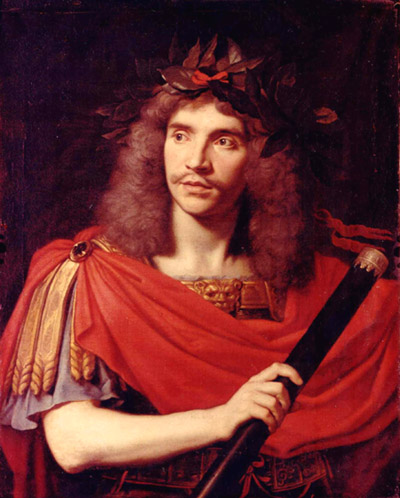 Portrait of Molière by Nicolas Mignard

It was on this date, January 15, 1622, that French poet and playwright Jean-Baptiste Poquelin, who became famous under the pen name Molière, was baptized in Paris where he was born. The son of an upholsterer who was valet to the King, his initial education was with the Jesuits at the Collège de Clermont. But at age 21 he rejected his father's career choice to found the Théâtre Illustre in Paris, which achieved some success. Molière established himself as an actor and playwright.

In 1658, at age 36, Molière returned to Paris and performed before King Louis XIV, winning the patronage of the king's brother. Louis became the godfather of Molière's son, also named Louis, in 1664. Molière's plays became popular in Paris. These included The School for Wives (L´École des Femmes, 1663), Tartuffe (1664), Don Juan (1665), The Misanthrope (Le Misanthrope, 1666), The Miser (L´Avare, 1668), and The Imaginary Invalid (Le Malade Imaginaire, 1673). Molière often played the lead role himself.

What is little known today is that Molière was a student of science, a lover of the skeptical Lucretius — he quotes the Roman poet in The Misanthrope (Act II, sc. 4, ll. 723-724) — and a freethinker in religion. He relished his literary jabs at the Catholic Church. If the playwright hadn't had royal protection, the clergy would have punished him severely for his satires. The last scene in Molière's Don Juan was described by a contemporary as "a school of Atheism in which, after making a clever Atheist say the most horrible impieties, he entrusted the cause of God to a valet who says ridiculous things." Don Juan was banned.

Tartuffe so stirred up the clergy, with its clever satire of religious fanatics and hypocrites, that it was banned for five years. That was a mild penalty: some clerics wanted the playwright burned as a heretic! Instead, he was excommunicated. In spite of this, the Catholic Encyclopedia claims Molière as one of the faithful. Speaking of Molière's morality the Catholic writer says,

...religion has no cause to approve the author of Tartufe. Molière's Christianity was not as profound as that of Corneille, Racine, Boileau, and nearly all the illustrious writers of his time. And yet, when there was question of his being given Christian burial, and the curé hesitated, on the ground that the priest had arrived too late to give absolution to the comedian, who, it may almost be said, passed from the stage to the tribunal of God, his widow proved that he had received the sacraments in the last previous paschal season.

The explanation in the Catholic Encyclopedia obscures the facts. Molière was performing the title role in The Imaginary Invalid (based on his own life and illness) when he collapsed onstage. He died that night, at his Paris home, on 17 February 1673. His wife summoned the priest, who refused to come — he was an excommunicate, after all, which the Catholic Encyclopedia fails to mention — and only under pressure from the king was Molière buried with a priest in attendance. And he was buried at night, in grounds reserved for suicides. In 1817 his remains were transferred to Père Lachaise Cemetery in Paris.

He is today considered the greatest comic playwright France has produced. It was Molière who said (The Amorous Quarrel (Le Dépit Amoureux), 1656), "We die only once, and for such a long time."