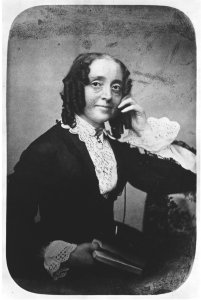 It was on this date, January 13, 1810, that American reformer Ernestine Rose was born Ernestine Louise Lasmond Potowski, the daughter of a Polish rabbi in a Warsaw ghetto. At an early age she rejected the Jewish religion and left home at age 17, traveling eventually to England. There she not only adopted the socialist reformist views of Welshman Robert Owen, an Atheist, but she met her future husband at an Owenite meeting. William Rose, a liberal Christian and skilled jeweler, left England with Ernestine to make their home in America, in 1836.

William supported Ernestine Rose as she fulfilled speaking engagements in New York on "Mr. Owen's system." She was popular in spite of her Polish accent and was nearly the only woman who spoke in public on any subject, let alone social reform. Her efforts soon encompassed feminism, and Rose led the drive to pass a Married Woman's Property Act, allowing women to retain their property after marriage. She opposed slavery with a fiery voice. Rose was, said one historian, "one of the best lecturers of her time," and "no orthodox man could meet her in debate."*

Indeed, Rose learned her Rationalism in Europe, even before she met her husband. Each anniversary of Thomas Paine's birthday (January 29), she gave toasts and speeches on the evil of organized religion, and the "superstition" inherent in Christianity. In 1853, she was selected president of the New York Paine Society, a first-ever accomplishment for a woman in any Paine group. Although against religion, Rose was a supporter of universal education: "Ignorance is the evil," she said at an 1845 convention, "knowledge will be the remedy. Knowledge not of what sort of beings we shall be hereafter, or what is beyond the skies, but a knowledge pertaining to terra firma, and we may have all the power, goodness and love that we have been taught belongs to God himself."**

Rose had the twin advantages of an attractive face and figure and a riveting platform persona and speaking style. At the Seventh National Woman's Rights Convention in New York (1856), she said,

... Sisters, ... I entreat you, if you have an hour to spare, a dollar to give, or a word to utter — spare it, give it, and utter it, for the elevation of woman! And when your minister asks you for money for missionary purposes, tell him there are higher, and holier, and nobler missions to be performed at home. ... If he asks you to give to the churches (which means to himself) then ask him what he has done for the salvation of woman. When he speaks to you of leading a virtuous life, ask him whether he understands the causes that have prevented so many of your sisters from being virtuous, and have driven them to degradation, sin, and wretchedness. When he speaks to you of a hereafter, tell him to help to educate woman, to enable her to live a life of intelligence, independence, virtue, and happiness here, as the best preparatory step for any other life. And if he has not told you from the pulpit of all these things; if he does not know them; it is high time you inform him, and teach him his duty here in this life.†

If Ernestine Rose had one flaw, it was an inability to compromise, or pander to the compromisers. To the end she remained friends with Susan B. Anthony, with whom she collaborated. She gave a speech, "In Defense of Atheism," in April 1861. Six weeks before her death, on 4 August 1892 at age 82, Rose gave a copy of that speech in the form of a pamphlet to London Freethinker publisher J.M. Wheeler. An Atheist to the last, Rose said there was nothing in it to alter.

Even the “Catholic Encyclopedia” can claim only that "his religion is scarcely more than that of a spiritually-minded pagan."