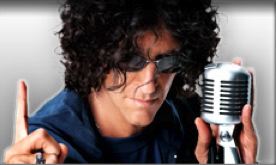 It was on this date, January 12, 1954, that radio "shock jock" Howard Allan Stern, the self-proclaimed "King of All Media," was born in Jackson Heights, NY. Both of his parents are Jewish, and although Howard Stern occasionally accompanies them to religious worship, he has demonstrated less than full allegiance to Judaism.

Since his volunteer days at Boston University, radio has been Stern's career. He earned his BA there in 1976. It was on BU radio that Howard Stern discovered that audiences liked his racy mix of sexual and scatological humor and calculated political incorrectness. Stern parlayed that patter into a successful and well-paid career that attracted, and benefited from, controversy. Stern is probably the most popular US radio personality, and the most-fined for indecency, in history: from 1990 to 2004, the Federal Communications Commission (FCC) has fined owners of radio stations that carried Howard Stern a total of $2.5 million for indecent programming, according to the Center for Public Integrity (2010).

It should go without saying that nothing is sacred to Stern's comic wit, including religion. On a 12 April 1995 E! network show, Stern said "Here's what happens when you die—you sit in a box and get eaten by worms. I guarantee you that when you die, nothing cool happens." Contrast that with such statements on his radio show as, "I believe in God — I'm afraid not to" — which might just as easily be a commentary on the ferocity of God toward honest unbelievers as a profession of faith.

Some listeners to his show (as of 2006 heard on Sirius Satellite Radio) have noted that Stern has compared religion to a "caveman worshipping a big rock." During a 14 April 1999 radio call-in show, so the story goes, a caller, who by all accounts sounded drunk or at least disoriented, asked Stern if he believed in God. Stern is said to have quipped, "I can't believe there's a God stupid enough to create an idiot like you!" Three days after the Columbine massacre, while discussing the tragedy on an 23 April 1999 call-in show, Stern became frustrated with a caller. He reportedly said, "Please with the God talk. Hate to break it to you, but there is no God." Stern apparently couldn't believe in a God who would allow "God's children" to be gunned down.

Stern has compared and contrasted his views on religion with other celebrities. On a 13 May 1999 telephone interview with Bill Maher, host of the now-defunct TV show "Politically Incorrect, Stern asked Maher if he believed in God. "Yeah, I believe in God, but not in religion. Don't you?" Stern replied, "No." In a 19 August 1999 phone interview with Marty Ingels, the comic-actor complained about the comedy routine George Carlin performed, criticizing religion as phony. When Ingels asked Stern if he believed in God, Stern admitted that he did not.

Finally, feminist author Camille Paglia counts herself a Howard Stern fan. In an interview for Stern's 1995 book Miss America, in The Advocate, Paglia asked Stern, "How do you feel about religion and politics?" Stern answered, "I'm sickened by all religions. Religion has divided people. I don't think there's any difference between the pope wearing a large hat and parading around with a smoking purse and an African painting his face white and praying to a rock."*

With all of his pranks, political incorrectness, tawdry humor and outrageous commentary, Stern has yet to be fined or fired for irreligion. But perhaps Howard Stern has proven that blasphemy truly is a victimless crime!

* Quotes are from the Howard Stern entry at the Celebrity Atheist List.

Comte denies metaphysics in favor of a reliance on sense experience as the source of human knowledge and denies the existence of a personal God.