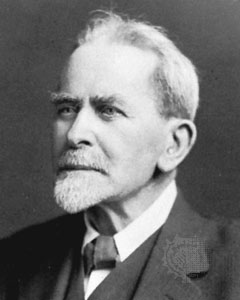 It was on this date, January 1, 1854, that British anthropologist, folklorist and author of The Golden Bough, Sir James George Frazer was born in Brandon Place, Glasgow, Scotland. The Frazer family were devout followers of the Free Church of Scotland, under whose strict doctrines James was raised. Frazer graduated in Classics at Trinity College, Cambridge, then studied Law at Middle Temple in London. But his first love was philosophy and anthropology, so he returned to Cambridge.

In 1890, Frazer published, in two volumes, the book for which he is remembered today, The Golden Bough: A Study in Magic and Religion. The Golden Bough, named after the golden bough in the sacred grove at Nemi, near Rome, shows the parallels between Christianity and the rites and superstitions of earlier cultures — the unspoken conclusion being that the borrower was Christianity. However, the only statements of Frazer's approaching religious skepticism in Golden Bough are in the 1900 edition. There, Frazer admits that his work "strikes at the foundations of beliefs in which the hopes and aspirations of humanity through long ages have sought a refuge."*

Although appointed professor of social anthropology at Liverpool University in 1910, Frazer preferred the refuge of Cambridge and returned there the next year to study and write. He went blind in 1931, and was active until his death on 7 May 1941.

Frazer's biographer, R.A. Downie,** does not discuss his religious beliefs. The Dean of the Chapel of Trinity College, although giving him a religious funeral, said after Frazer's death, "He was not an Atheist. I would say perhaps that he held his judgment in suspense."† That is the common definition of an Agnostic.

* J.G. Frazer, The Golden Bough: A Study in Magic and Religion, 2nd ed. 1900, p. xxii. You can find the full text of this work at this link. In other works, such as Folk-Lore in the Old Testament (1908), The Belief in Immortality and the Worship of the Dead (1913-24), and The Fear of the Dead in Primitive Religion (1933-6), Frazer's Rationalism is clearer. ** Robert Angus Downie, James George Frazer: The Portrait of a Scholar, 1940. Downie's silence on Frazer's religious beliefs may have been in well-meaning deference to the feelings of the still-living author. † News-Chronicle, 9 May 1941.