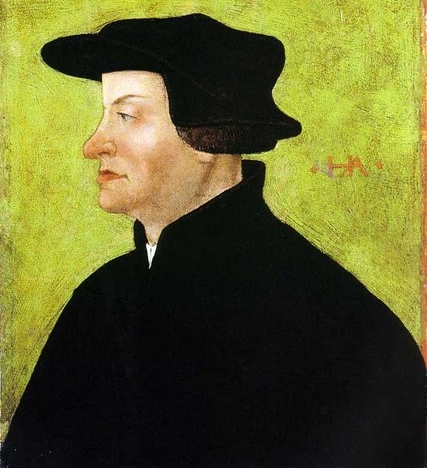 It was on this date, January 1, 1484, that Swiss Protestant reformer Huldrych Zwingli was born at Wildhaus near Zürich, Switzerland, the son of a town magistrate whose brother was the town priest. Zwingli’s early religious education was influenced by the teachings of Thomas Wyttenbach (1472-1526). He was ordained to the priesthood, became a formidable humanist scholar, and set up shop in Zürich in 1518.

Zwingli was the only major Protestant reformer of the 16th century whose movement did not become a church. Similar to but apart from Martin Luther's reforms, his were yet another attempt to return to scripture and to escape the corrupting effect of priesthood on church doctrine which so disturbed ex-Catholics about their former church. While a disputant of Luther's, Zwingli managed to find more accommodation for science within scripture than his more famous Reformation contemporary. He enjoyed his correspondence with Dutch humanist and theologian Desiderius Erasmus.

However, as Andrew D. White points out in his Warfare of Science with Theology, certain superstitions of the old faith Zwingli refused to change in the new faith. He "held to the opinion of the fathers that a great firmament, or floor, separated the heavens from the earth; that above it were the waters and angels, and below it the earth and man" and insisted "that the comet of 1531 betokened calamity,"* as so many of his contemporaries were wont to believe.

To the modern age, one of Zwingli’s more interesting breaks with the Roman Church was on the doctrine of celibacy and chastity. The chief objection to his taking the office of leut-priest in Zürich was that he had seduced a girl of good family. He denied the charge, but admitted to following what amounts to a 16th century version of "free love." From 1522 Zwingli cohabited with a Zurich innkeeper's daughter, Anna Reinhard, only marrying her in 1524 when social pressure demanded it. They produced four children with no discernable diminution of Zwingli's ecclesiastical effectiveness.**

Huldrych Zwingli died in battle, serving as a field chaplain, when Swiss Catholics overwhelmed his heretical enclave in Zürich, on 11 October 1531. His body was quartered, hanged and burned, as befits those who disagree with the priests of the gentle Galilean.

* Andrew D. White, A History of the Warfare of Science with Theology in Christendom, 1895, Chapters 2 and 4. ** An account of Zwingli's sexual liaisons is given at this link.

In her biography of her father, Mary Ellin Barrett refers to her father's "agnosticism," and describes him as a "nonbeliever."