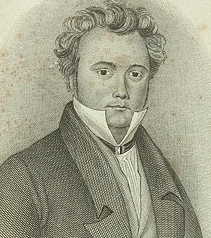 It was on this date, December 9, 1790, that rebel publisher and Freethought fighter Richard Carlile was born in Ashburton, Devon, the son of a shoemaker who abandoned the family four years later. He received some education at a Church of England school, then took to work, marrying and starting a family in London. Hard economic times prompted Carlile to attend political meetings and read Thomas Paine: he soon became an advocate of government reform.

As a publisher Carlile hit upon the clever idea of taking reformer works such as Paine's Rights of Man, splitting them up, and selling them as multi-part pamphlets. He began publishing a radical newspaper, The Republican, which featured the writings of Percy Bysshe Shelley and Lord Byron. On 16 August 1819, Carlile was asked to attend a meeting with reformer Henry Hunt and witnessed the Peterloo Massacre, in which the cavalry broke up the meeting and killed eleven attendees. When Carlile criticized the government brutality, he was arrested and imprisoned for blasphemy (for publishing Paine's Age of Reason) and seditious libel (for criticizing the government).

While in prison, Carlile continued to direct The Republican, which was run by his wife until she was arrested, then run by her sister until she was arrested. Increasingly desperate, the government levied a tax on cheap newspapers, making them unaffordable for working men. In all, Carlile spent nine years and four months in jail. He emerged from prison in 1825, a firm supporter of equal rights for women: his Every Woman's Book (1826) advocated birth control and the sexual emancipation of women. Britain's Dictionary of National Biography says Carlile "did more than any other Englishman of his day for the freedom of the Press." It could be said that his energy and ingenuity literally exhausted his persecutors.

Like Thomas Paine, the writer who converted him, Carlile was a Deist, but some of his supporters, such as John Stuart Mill, might have described him as an Atheist. His "infidel home missionary tour," with the radical cleric Robert Taylor, caused a stir at the University of Cambridge (21 May 1829). In July of the next year, in a dilapidated building on the south bank of the River Thames known as The Rotunda, he and Taylor ("The Devil's Chaplain") staged infidel melodramas and preached radical sermons. Copies of these sermons were circulated in a seditious publication called The Devil's Pulpit.

Carlile died on 20 February 1843 and was memorialized by many supporters. It was Richard Carlile who said, "The fable of a god or gods visiting the earth did not originate with Christianity."*

As a witness, Brando refused to take an oath to tell the truth before God, claiming he is an atheist. He was sworn in under an alternate oath, which would seem to be the one that should be used.