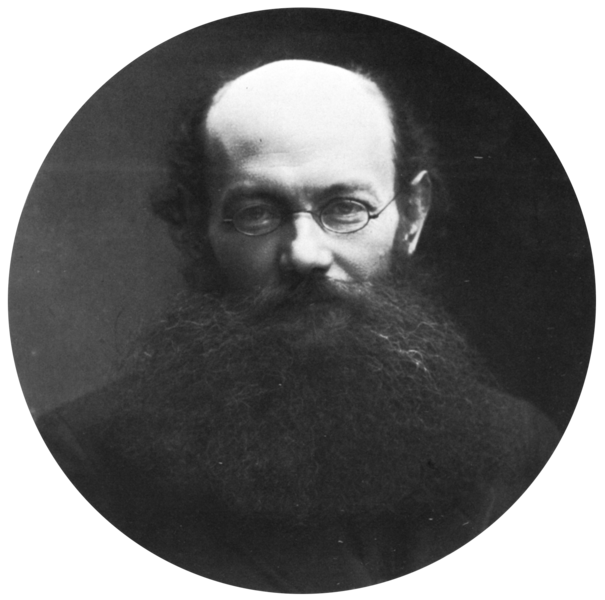 It was on this date, December 9, 1842, that Russian geographer Peter Alexeyevich Kropotkin (Пётр Алексеевич Кропоткин) was born in Moscow into a noble family. As a 15-year-old, he was a page to the Tsar and later served as attaché to the Governor of Siberia. At age 22 Kropotkin was awarded the Gold Medal of the Royal Geographical Society for his explorations, and his star was on the rise in the Tsarist service until, in 1872, he joined the Socialist movement. His political leanings got Kropotkin confined to prison. He escaped to Switzerland, but moved on to France, where he was again imprisoned before he could deliver a series of anarchist lectures called The State: Its Historic Role.*

In a work called Anarchist Morality, Kropotkin recognizes the foundation of morals has nothing to do with religion:

If man distinguishes between good and evil, say theologians, it is God who has inspired him with this idea. Useful or hurtful is not for him to inquire; he must merely obey the fiat of his creator. ... Others have tried to explain the fact by law... They know that law has merely utilized the social feelings of man, to slip in, among the moral precepts he accepts, various mandates useful to an exploiting minority ... [The Utilitarians] will have it that man acts morally from self-interest ... It is again to the thinkers of the eighteenth century that we are indebted for having guessed, in part at all events, the origin of the moral sentiment. ... In a fine work, The Theory of Moral Sentiment [1759], left to slumber in silence by religious prejudice... Adam Smith has laid his finger on the true origin of the moral sentiment. He does not seek it in mystic religious feelings; he finds it simply in the feeling of sympathy.**

Prince Kropotkin was a pacifist and an Agnostic in the mold of Leo Tolstoy.