December 8: The Errors of Pius IX 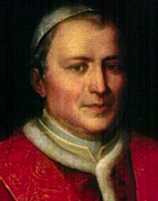 It was on this date, December 8, 1864, that Pope Pius IX published the encyclical Quanta cura, containing the Syllabus errorum or Syllabus of Errors. The Pope "reprobated. proscribed, and condemned" eighty propositions concerning various kinds of religious Liberalism that had been creeping into his Church, a body he believed had stopped innovating with Thomas Aquinas in the 13th century.

The Catholic Encyclopedia describes the Syllabus as "an inestimable service to the Church and to society at large." It was in fact a repudiation of the popular demand for freedom of inquiry and freedom of conscience. The following ideas are condemned in the Syllabus, but sound quite reasonable taken as stated:

3. Human reason, without any reference whatsoever to God, is the sole arbiter of truth and falsehood...
12. The decrees of the Apostolic See and of the Roman congregations impede the true progress of science.
13. The method and principles by which the old scholastic doctors cultivated theology are no longer suitable to the demands of our times and to the progress of the sciences.
15. Every man is free to embrace and profess that religion which, guided by the light of reason, he shall consider true.
24. The Church has not the power of using force, nor has she any temporal power, direct or indirect.
40. The teaching of the Catholic Church is hostile to the well-being and interests of society.
47. The best theory of civil society requires that popular schools open to children of every class of the people ... should be freed from all ecclesiastical authority, control and interference....
55. The Church ought to be separated from the State, and the State from the Church.
67. By the law of nature, the marriage tie is not indissoluble, and in many cases divorce properly so called may be decreed by the civil authority.
80. The Roman Pontiff can, and ought to, reconcile himself, and come to terms with progress, liberalism and modern civilization.

What Pius IX condemned generally as "Liberalism" is today seen as general principles of modern civilization. The Syllabus, still in force today, is Roman medievalism gasping for air.

Annie Besant (1847) It was on this date, October 1, 1847, that English Atheist-turned-Theosophist Annie Besant (originally Annie Wood), was born in London. Her widowed mother could find only enough work to support herself, so Annie was reared by a friend. At age 19, she was married off to the Rev. Frank Besant, whose narrow […]