December 7: End of the Great Schism 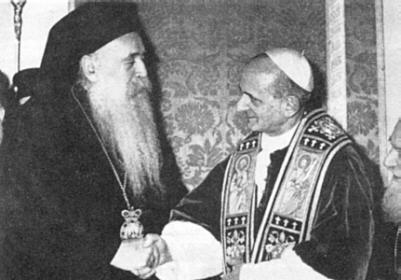 Athenagoras I and Paul VI

It was on this date, December 7, 1965, that Roman Catholic Pope Paul VI and Greek Orthodox Patriarch Athenagoras I (Αθηναγόρας Α') simultaneously lifted the 900-year-old mutual excommunications that led to the split of their two churches in 1054. An excommunication in the Dark Ages actually meant something, whereas today it would be a laughing matter. That's progress. But even in the 11th century, the power of the Roman Church to punish heresy was employed with a political tone-deafness, and a preference for instant gratification over the long-term interests of the Church, that was repeated with similar loss for the Church in the excommunication of King Henry VIII.

In fact, from the 2nd century Constantinople (the Eastern Church) had never recognized the supremacy of Rome. According to the Catholic Encyclopedia, Pope Leo IX was "profoundly troubled" that the Greek patriarch, Michael I Cerularius, apparently continued to refuse Rome's frankly arrogant assertion of universal sovereignty over the faithful. Blaming Eastern arrogance for his actions, Leo declared all the Greeks excommunicated and, just before he died, designated cardinals Humbert and Frederick to deliver the bad news. Michael Cærularius returned the favor at the Synod of Constantinople, and all were mutually cut off from God (in each others' eyes) on 16 July 1054.

Fast-forward 911 years: Pope Paul VI, of Humanæ Vitæ ("Of Human Life") fame, completed the Second Vatican Council, after the death of Pope John XXIII. On that occasion, a declaration was read out on 7 December 1965, simultaneously at Rome and at a special ceremony in Istanbul. The declaration rescinded the mutual excommunications between the Roman see and the Patriarchate of Constantinople, commonly known as the Great Schism.

This is a laudable example of doctrinal enemies attempting to play nice with each other, in human terms, but it leaves one rather rude question (in supernatural terms): If the supposedly perfect Supreme Being was right in 1965, was he wrong in 1054 — when both excommunication and faith were stronger?