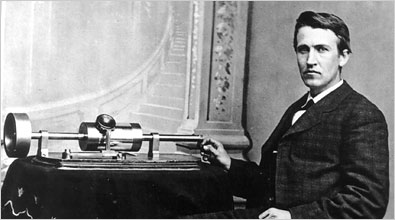 Edison at his phonograph

It was on this date, December 6, 1877, that inventor and Atheist Thomas Alva Edison demonstrated the first sound recording at West Orange, New Jersey. On that occasion he recited "Mary had a Little Lamb" into a recording device using a needle to scratch a sound track onto a cylinder wrapped in tinfoil.

edisonThe first words I spoke in the original phonograph. A little piece of practical poetry:
Mary had a little lamb
Its fleece was white as snow
And everywhere that Mary went
The lamb was sure to go.*

The first sound recording followed the first electronic long-distance telegraph message by 33 years. The secular children's poem was recorded in preference to the paraphrase of Numbers 23:23, "What hath God wrought,"** transmitted from Baltimore to an astounded Congress in Washington DC by the Nativist politician and painter Samuel F.B. Morse. While Morse thanked God for what the scientific work Hans Christian Oersted, Joseph Henry and Michael Faraday had wrought, the skeptical Edison credited the proper authorities: "A good idea is never lost," he said,

Even though its originator or possessor may die, it will someday be reborn in the mind of another. ... Because ideas have to be original only with regard to their adaptation to the problem at hand, I am always extremely interested in novel ideas others have used successfully.

* The recording is a 1927 recreation of the original 1877 recording. The technology had advanced somewhat in 50 years! ** Numbers 23:23 "No, there is no sorcery against Jacob, nor omen against Israel. It shall yet be said of Jacob, and of Israel, 'Behold what God has wrought!'" The message was recorded on a paper tape in Washington, DC. The phrase had been suggested to Morse by Annie Ellworth, the young daughter of a friend.