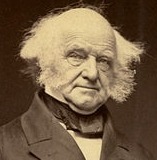 It was on this date, December 5, 1782, that the 8th President of the United States (4 March 1837 - 4 March 1841), and the first US President born in the United States, Martin Van Buren, was born in New York. Of Dutch ancestry, he attended the Dutch Reformed Church. A protégé of Aaron Burr and the Vice President to Andrew Jackson, during Van Buren's one-term presidency he attended the Episcopal church in the neighborhood of the White House.

There is no record that Van Buren was a communicant at either church, or that he took any interest in religious subjects. His public professions were pro forma. His biographer, Denis Tilden Lynch, does not paint him as conspicuously pious. In his Autobiography (1920), Van Buren makes no religious profession, but he does criticize the ministers for interfering in political affairs.

In 1840, when news of the arrest and torture of Jews in Damascus for the "blood libel" reached President Van Buren, he cited America's institutions, which "place upon the same footing, the worshipers of God, of every faith and form." American values compelled him, he said, to protest "in behalf of an oppressed and persecuted race, among whose kindred are found some of the most worthy and patriotic of [American] citizens."