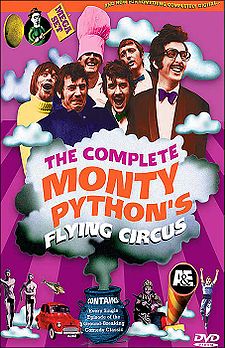 Some of their most memorable sketches include a man trying to return a Dead Parrot to a pet shop; a Cheese Shop that is completely uncontaminated by cheese; the Lumberjack Song that doesn't sound like any lumberjacks we know; the Spam song and many others. As their fans know, nothing is sacred in the skewed Monty Python universe: not politics, not sex, and certainly not religion. Among their irreligious revelries are "The Spanish Inquisition":

Chapman: I don't know — Mr Wentworth just told me to come in here and say that there was trouble at the mill, that's all — I didn't expect a kind of Spanish Inquisition.
Cardinal Ximinez of Spain: Nobody expects the Spanish Inquisition! Our weapon is surprise... surprise and fear... fear and surprise.... Our two weapons are fear and surprise... and ruthless efficiency.... Our three weapons are fear, surprise, and ruthless efficiency... and an almost fanatical devotion to the Pope.... Amongst our weapons.... Amongst our weaponry... are such elements as fear, surprise.... I'll come in again.

Then there's "Crackpot Religions Ltd" and "Every Sperm Is Sacred," a satire on the Catholic church's attitude toward birth control;

The skewering of faith continued in the Monty Python movies, especially Monty Python's Life of Brian (1979), which satirizes the rise of the Christian religion with a fictional Brian who keeps getting mistaken for the Messiah. Brian was banned in Norway and Ireland for blasphemy — then cleverly re-released in the US on 30 April 2004 for its 25th anniversary, two months after the theatrical release of The Passion of the Christ (2004)!