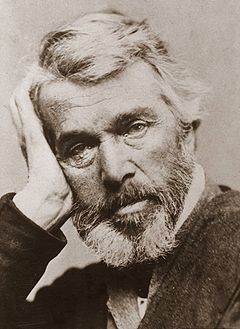 It was on this date, December 4, 1795, that British historian Thomas Carlyle was born in Ecclefechan in Scotland. He was brought up in a strict Calvinist home and began his career as a teacher in 1813 while studying for the ministry. Carlyle abandoned his Christian beliefs in 1818 after reading Gibbon. After further study in German literature, especially Goethe, which he translated for the British public, Carlyle gave up the Holy Ghost and immortality, as well, adopting a Pantheism like Goethe's.

This rejection of Christianity and embrace of a vague spiritual belief can be seen in one of Carlyle's most famous works, Sartor Resartus (1834), published in Fraser's Magazine. He made his reputation as a historian with his 1836-7 French Revolution. But he wrote many essays, as well, including one on Voltaire in which he praises the French writer for having given "the death-stab to superstition." Carlyle is equally outspoken in his Frederick the Great (18 vols., 1858-65) and his Life of Sterling (1851), although he reviled not only the churches, but Positivism, Evolution — and Democracy (he believed, instead in the "great man" theory of history: see his On Heroes and Hero-Worship, 1840).

Carlyle admitted to the poet William Allingham that he was Agnostic, saying "I have for many years strictly avoided going to church and having anything to do with Mumbo-Jumbo."* About a future life, Allingham records Carlyle remarking, "We know nothing: all is, and must be, utterly incomprehensible."**

Carlyle's influence, if not his reactionary philosophy, was felt on later writers, including Matthew Arnold and John Ruskin. After his wife's death, in 1866, Carlyle wrote little. He died on 5 February 1881 in London. It was Thomas Carlyle who said, "Just in the ratio that knowledge increases, faith diminishes."† and "It is not possible that educated, honest men can even profess much longer to belief in historical Christianity."‡