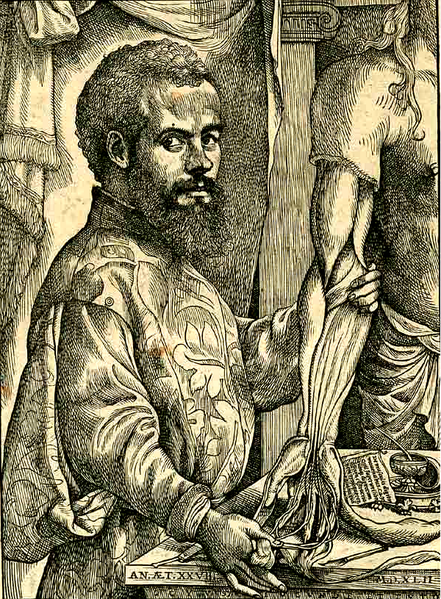 It was on this date, December 31, 1514, that Flemish anatomist Andreas Vesalius was born Andreas van Wesel in Brussels, Belgium. Vesalius was descended from a family of German physicians and was the son of the court-apothecary to the Emperor Charles V. He got his schooling at Louvain and Paris, and earned his M.D. at Padua.

Vesalius had studied medicine in the tradition of the ancient Roman anatomist Galen (129-211), but in acquiring great skill in dissection — often practiced on the bodies of criminals stolen from the gallows — he discovered many errors in Galen's work. These errors could be corrected only by active dissection and observation, so Vesalius wanted to make anatomy the foundation of all other medical research. When Vesalius was only 28, he published the greatest work on human anatomy yet seen De Humani Corporis Fabrica.[1] It influenced scientists up to the 19th century.

It is with some irony that Vesalius is claimed by the Catholic Encyclopedia and is considered one of the great Catholic scientists. Even that reference admits, "Personally he avoided expressing his opinion, in order not to fall under suspicion of heresy,"[2] which is as if to say that Vesalius might have been a freethinker if the price of professing it were not so dear. In fact, Vesalius was harassed by the Church all his life, and only as physician to Emperor Charles V was he protected from the Inquisition. The cause of this clerical hostility is a further irony: the famous anatomist was hounded for his practice of human dissection!

"In speaking of the seat of the soul," the Catholic Encyclopedia admits, Vesalius "blames the theologians for wishing to solve such questions without understanding anatomy."[3] In fact, human dissection was considered forbidden by the Roman Church since Tertullian and Augustine. Later, a bull (De Sepulturis, 1300) of Pope Boniface VIII — Dante, a contemporary, consigns Boniface to the depths of hell — was construed as forbidding all dissection, with the added bonus of excommunication for those engaging in it.[4]

Another impediment to Vesalius was the general theological belief "that there exists in man a bone imponderable, incorruptible, incombustible — the necessary nucleus of the resurrection body."[5] What irked the Church was perhaps not so much that Vesalius dissected human bodies, but that when he did so he did not find this highly venerated if highly speculative "resurrection bone." Though Vesalius deferred to the theologians on this point, he had nevertheless exposed the error of their theology. Furthermore, as the legend of Adam and Eve demonstrates, there must be one less rib in male humans than in females. This, too, Vesalius found erroneous.

Finally, the charge of dissecting a living man was trumped up — the man's family also charged Vesalius with atheism — and the Inquisition moved against the greatest surgeon in Europe. Philip II was not as helpful as his predecessor, Charles. The price of protecting Vesalius from the pope's ecclesiastical enforcers was a pilgrimage to Jerusalem. That journey wrecked the scientist's health. The Catholic Encyclopedia says, "In that age there could be only one reason for such a dangerous journey as one to the Holy Land, namely strong religious feeling."[6]

But in the absence of positive statements from Vesalius, freely made, that conclusion is far from certain. In the article on Anatomy in the eleventh edition of the Encyclopædia Britannica, the editor (Vice-President of the Anatomical Society of Great Britain) calls the fate of Vesalius "a lasting example of the barbarism of the times." And in Andrew D. White's Warfare of Science with Theology, the details of the persecutions Vesalius endured are set forth with impeccable references.[7]

Andreas Vesalius died at age 49 in Zakinthos, Greece, on 15 October 1564. He had reached Jerusalem, but never made it back home. You could say Vesalius died for the church that persecuted him.

It is very commonly accepted that there was an interruption in the development of anatomical knowledge about the beginning of the fourteenth century because of a papal decree forbidding dissection. The statement that such a decree was promulgated is to be found in nearly every history of medicine published in English, and has been made much of in books on the supposed opposition of science and religion. There was no such decree, however, and the declaration that the development of anatomy was interfered with by the ecclesiastical authorities is founded on nothing more substantial than a misunderstanding of the purport of a decree of Pope Boniface VIII. In the year 1300 this Pope issued the Bull De Sepulturis. The title of the Bull runs as follows: "Persons cutting up the bodies of the dead, barbarously cooking them in order that the bones being separated from the flesh may be carried for burial into their own countries are by the very fact excommunicated." The only possible explanation of the misunderstanding that the Bull forbade dissection is that some one read only the first part of the title and considered that as one of the methods of preparing bones for study in anatomy was by boiling them in order to be able to remove the flesh from them easily, that this decree forbade such practices thereafter.

John Addington Symonds (1840) It was on this date, October 5, 1840, that British writer John Addington Symonds was born in Bristol. He was educated at Oxford and married Janet Catherine North (sister of botanical artist Marianne North), on 10 November 1864, producing four daughters. Having health problems throughout his life, Symonds gave up the […]