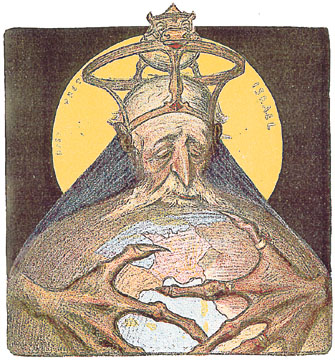 A common theme in anti-Semitism: a Jew holding the world in his hands

It was on this date, December 30, 1993, that the Vatican and Israel agreed to recognize each other. This diplomatic nicety did not, of course, end anti-Semitism anymore than the establishment of the State of Israel did, but it is always gratifying to see two major superstitions agree to play nice with each other on the world stage. That one party (the Roman Church, headquartered at the Vatican) was the offender, and the other (the world's Jews, with a homeland on appropriated real estate called Israel) was the "offendee," did not detract from the salutary effect on the Church's reputation.

When European Christians weren't killing Jews, they were unaccountably praising their pre-Captivity (584-536) Hebrew ancestors for their advance of morals and ethics beyond all other ancient nations. But if you can likewise accept that the characters of Moses, Joshua, Saul, David, and Solomon actually existed at one time on earth, you will have no trouble twisting the dates of history to demonstrate that the nomadic Hebrews taught something to earlier cultures, rather than making no unique contribution to them. There was, for example, an admirably high morality in Egypt and Babylonia long before the appearance of the first Hebrew prophets in the eighth century BCE. No reputable Egyptologist will say that there was ever a Hebrew "sojourn" in Egypt, either.

It is similarly undisputed that the Hebrews, until the time of Josiah, were polytheistic and worshipped phallic nature-gods and engaged in sacred prostitution. Much evidence of this can still be found in the Old Testament, when the editors slip up and leave a plural, in reference to their "Jahveh," instead of a singular (e.g., Genesis 1:26). And much of their holy writings were clearly copied: the Potiphar story, for example, is derived from the Egyptian "Tale of Two Brothers." Yet the Hebrew tribes were so obscure that they failed to attract the attention of either Herodotus (484-425 BCE) or Alexander (356-323 BCE). When the Hebrews came in contact with better civilizations, they adopted better morals and revised their holy writings accordingly — until the canon was closed in the fourth century BCE.

But an adaptable people they were, and the Jews distinguished themselves with industry and learning in every culture in which they were a minority and not too terribly repressed. Their history under Christian monarchs has been one of almost unbroken persecution, savage treatment (for refusing to become Christian), the occasional blood libel*, and frequent expulsions. This ill treatment was ostensibly because the Roman Church taught that the Jews were to be hated for killing their god, Christ — as if killing a god were possible. But blaming Jews for killing Christ is hypocritical: without the death of their Christ, there would be no Christianity!

In fact, European Christianity used hatred of Jews as an organizing force from the earliest times. By contrast, when Jews lived under liberal or skeptical Caliphs, in Islamic regions, they made splendid contributions to civilization and were conspicuous in every field of culture, in industry and in trade. Indeed, it was Jewish merchants who stirred Europe from the slumber of its Dark Age by carrying with them to Europe the products, and teaching the science, of Moslem Spain and Sicily.

The Fundamental Agreement Between the Holy See and the State of Israel, signed on this date in 1993, while a milestone in interfaith relations, might have been signed 1900 years earlier. It came about 50 years too late for the Holocaust, and 45 years after the establishment of the State of Israel. And it also comes with some theological complications. The Roman Church had been teaching for so long that God hates Jews — and, under color of the "one true faith," Jews had been persecuted by Christians for nearly two thousand years — so... if God is right today, and Jews are not "reviled of God," was he wrong in the Dark Age, when faith was stronger?

*Blood libel: according to Wikipedia, “refers to a false accusation or claim that religious minorities, almost always Jews, murder children to use their blood in certain aspects of their religious rituals and holidays. Historically, these claims have – alongside those of well poisoning and host desecration – been a major theme in European persecution of Jews. The libels typically allege that Jews require human blood for the baking of matzos for Passover.”