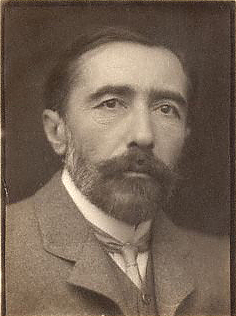 It was on this date, December 3, 1857, that English author Joseph Conrad was born Józef Teodor Konrad Korzeniowski in Berdichev, Ukraine, a region that had been a part of Poland but was then under Russian rule. Nevertheless, Conrad is considered Polish-born. His father was a poet and translator of English and French literature, and saw to it that Jozef read Polish and French versions of English novels. But by 1869 both Conrad's parents had died of tuberculosis, so Josef lived in Switzerland with an uncle.

After some formal schooling in Kraków, Jozef was allowed to go to sea with the French merchant marine, then for 16 years in the British merchant navy. By 1886 Jozef obtained his master mariner's certificate, commanding his own ship, Otago. In that same year he became a British subject and officially changed his name to Joseph Conrad. His years at sea changed his life and influenced his writing, as well as his philosophy. As Conrad put it,

What makes mankind tragic is not that they are the victims of nature, it is that they are conscious of it. To be part of the animal kingdom under the conditions of this earth is very well — but soon as you know of your slavery, the pain, the anger, the strife ... the tragedy begins.

Retiring from the sea in 1894, Conrad published his first novel, Almayer's Folly, the next year. This was followed in 1897 by his famous Nigger Of The "Narcissus.". In 1900 he published Lord Jim, which was expanded from a short story involving some true historical incidents. Conrad's most memorable 1902 novel, Heart Of Darkness, based on his own command of a Congo River steamboat, inspired Francis Ford Coppola's 1979 film, Apocalypse Now. It was also filmed in 1993 under its original title. These and many of his other novels Conrad based on his adventures as a sailor, such as his 1915 Victory: An Island Tale, filmed in 1919, 1930, 1940 and 1995.

But Conrad branched out in such works such as Nostromo (1904), filmed as a TV mini-series in the UK, and the inspiration for the name of the spaceship in the 1979 film Alien (another ship in the film was named Narcissus). There was also The Secret Agent (1907), which Alfred Hitchcock filmed in 1936 as the spy thriller, Sabotage; it came to the screen under its own name in 1996.

Conrad refused five honorary degrees in his lifetime, plus an offer of knighthood in 1924. Throughout his writing career he professed a non-Christian Theism which approached Agnosticism. In Some Reminiscences (1912), while at the height of his powers, Conrad wrote, "The ethical view of the universe involves us in so many cruel and absurd contradictions that I have come to suspect that the aim of creation cannot be ethical at all."*

Even though English was not his first language, Conrad rose to become one of the most famous novelists of his generation. In fact, he influenced an entire generation of writers to come, including Ernest Hemingway, F. Scott Fitzgerald, Arthur Koestler, T.S. Eliot, Marcel Proust, André Malraux, Louis-Ferdinand Céline, Jean-Paul Sartre, and Graham Greene.

In declining health during his last few years, Conrad succumbed to a heart attack on 6 December 1924. He was buried in Canterbury. It was Joseph Conrad who said, "Christianity has lent itself with amazing facility to cruel distortion ... and has brought an infinity of anguish to innumerable souls on this earth." and also, "Scepticism ... is the agent of truth."