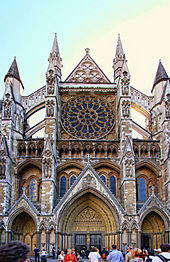 It was on this date, December 28, 1065, that Westminster Abbey, in Westminster, London, was consecrated. The now- traditional place of coronation and burial for English monarchs, located just to the west of Westminster Palace, contains the Collegiate Church of St. Peter as well as the Abbey, or home for monks. According to legend, the church received its name after a fisherman's miraculous vision of St. Peter. The original Benedictine Abbey was built in the Romanesque style at the decree of the penultimate Norman monarch of England, the very pious Edward the Confessor, between 1045-1050, as penance for his failure to undertake a promised pilgrimage. Westminster was rebuilt in the Gothic style we recognize today between 1245-1517.

Edward was not able to attend consecration, which took place just a week before the king died, on 5 January 1066. The consecration rite itself, according to the Catholic Encyclopedia, is superior to a mere blessing, which may be performed by a priest. Consecration, at least today,

is a rite reserved to a bishop, who by the solemn anointing with holy chrism [a "mixture of oil of olives and balsam, blessed by a bishop"], and in the prescribed form, dedicates a building to the service of God, thereby raising it in perpetuum to a higher order, removing it from the malign influence of Satan, and rendering it a place in which favours are more graciously granted by God.

So if God watches over Westminster Abbey, one would think he might have prevented King Henry VIII from seizing and closing it during the Dissolution of the Monasteries (1534, 1540), and might have prevented Henry's daughter, Queen Elizabeth I, from converting it into a "royal peculiar" (1559), a church responsible directly to the sovereign, rather than to a diocesan bishop.

Furthermore, while the relics of "Saint" Edward the Confessor are said to reside in Westminster, as with the bodies of most kings and queens of England — Henry VIII was buried at St. George's Chapel, Windsor Castle, by the way — there is a curious collection of the impious residing eternally in and around Westminster Abbey:

But the biggest surprise of all, at least to those who believe Westminster Abbey to be holy Christian real estate "in perpetuum," and that the magic rite of consecration means something (anything), must be one of those now buried in the Nave. That would be the man whose scientific theory removed God from the role of Creator: the admittedly agnostic Robert Charles Darwin!

Simón Bolívar (1783) It was on this date, July 24, 1783, that South American liberator and president Simón José Antonio de la Santísima Trinidad Bolívar - Simón Bolívar - was born in Caracas, Venezuela. His parents were wealthy, but they died early. Bolívar inherited a fortune that assured him of a quality education, partly in […]