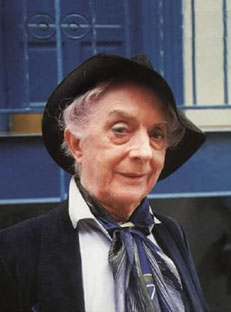 It was on this date, December 25, 1908, that English writer, actor and homosexual rights campaigner Quentin Crisp was born Denis Charles Pratt in the London suburb of Sutton. The self-described "stately old homo of England" relates in his autobiography how, in his early twenties, he decided to devote his life to "making the existence of homosexuality abundantly clear to the world's aborigines."

Crisp once made his living as a paid nude model in government-supported art schools — literally, a naked civil servant. This became the title of his autobiography, which was dramatized on American television in 1975. His cross-dressing and effeminate style often elicited reactions ranging from verbal taunts to physical assaults. In the early 1980s, fed up with England, Crisp became a Resident Alien in the US — publishing a second autobiography with that title in 1996.

Although he rejected the natural comparisons to Oscar Wilde, Crisp was narrator for a 1988 film version of Wilde's "Ballad of Reading Gaol." He returned to the screen several more times, including an appearance in 1992 as Queen Elizabeth I in Orlando! Aside from denying that he was a "practicing homosexual" — "I didn't practice; I was already perfect" — Crisp was an Atheist. "When I told the people of Northern Ireland that I was an atheist," Crisp once quipped, "a woman in the audience stood up and said, 'Yes, but is it the God of the Catholics or the God of the Protestants in whom you don't believe?'"

Crisp died in Manchester, England, on 21 November 1999 at age 90. It was Quentin Crisp who said, "The absolute nothingness of death is a blessing. Something to look forward to."