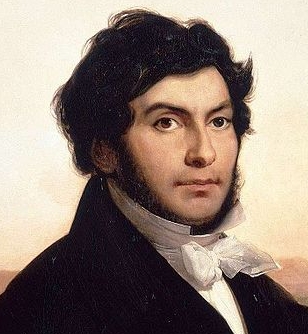 It was on this date, December 23, 1790, that the Frenchman who unlocked the Egyptian inscriptions, Jean-François Champollion, was born in Figeac. Because of the Revolutionary chaos in France, Champollion got his instruction, until he turned 10, from his oldest brother, who was also an archaeologist. By age 11 Champollion could read the Bible in Hebrew. He also acquired Latin, Greek, Amharic, Sanskrit, Avestan, Pahlavi, Arabic, Syriac, Chaldean, Persian and Chinese — in addition to his native French. With his acquisition of Coptic, an Egyptian language and script dating to perhaps two centuries before the Christian era, Champollion became interested in the race to translate the mysterious inscriptions of Ancient Egypt.

His efforts to decipher the hieroglyphics, or "sacred script," began in 1808. By use of various inscriptions, but chiefly through the 2nd-century BCE Rosetta Stone — discovered by Napoleon's army nine years earlier — on 17 September 1822 Champollion read before the Academy of Inscriptions at Grenoble his first deductions on what the picture-writing meant ("Lettre a M. Dacier"). He published a more complete system of translation in 1824 (Précis du système hiéroglyphique des anciens Égyptiens, 1824, 2nd. ed. 1828), expanding on and correcting the work of his competitor, British physician Thomas Young, and has since been considered the father of modern Egyptology.

Champollion was not only an accomplished scholar and linguist, but also politically active. He participated in a Bonapartist putsch in 1821, which resulted in a charge of treason. He went into hiding under the protection of his brother, but continued his work in secret.

As for Champollion's character, while the Catholic Encyclopedia claims him as one of the faithful, the best it can do to support that assertion is to say, "He was a genius, but it is the testimony of all those who came in contact with him that the man was even better than the scholar." Other sources claim him as significant in religious history.* However, Champollion's biographer, Hermione Hartleben, quotes from a Rationalist manuscript Champollion wrote at the age of thirty, saying that it is "undeniable that a change had taken place in his religious views."**

In a collection of the Egyptologist's letters, Hartleben confirms this. Rarely does agreeing with the prevailing religious opinion land one in trouble, so we must not interpret Champollion's later silence on religious matters, either way, as agreement. Like most public figures during the post-Revolutionary Royalist reaction, Champollion was compelled to keep his religious opinions discreet.

What Champollion might have accomplished had he lived longer can only be conjectured. In 1831, a Chair of Egyptian antiquities was created for him at the Collège de France. He became a member of the French Academy. But he didn't have long to enjoy this capstone to his career. In Paris, Jean-François Champollion died of a stroke at the age of forty-one in 1832, and was buried in Père Lachaise cemetery.

As a side note, it was in 1827 that American religious leader Joseph Smith set about translating glyphs he claimed were Ancient Egyptian into his Book of Mormon. Unless we accept some supernatural agency in the process — the gold plates he worked from no longer exist on earth — it was an extraordinary feat: the complete edition of Champollion's scholarly work on Egyptian inscriptions would not be published until the next year! A copy of some of Smith's characters was presented in 1828 to a Dr. Charles Anthon in New York City for authentication. The LDS church claims he authenticated the writing, but Mormon historian B.H. Roberts asserts that Anthon called the scribblings "a trick."† It is likely that Roberts is correct: no one in America could correctly translate hieroglyphics in 1828 — especially not the lightly educated Joseph Smith! It was the skeptic Jean-François Champollion who first did so correctly.

"Civilization will not attain to its perfection," wrote Zola, "until the last stone from the last church falls on the last priest."