December 22: What Is a Jubilee?

Pope Leo XIII Proclaims a Jubilee (1885):
What Is a Jubilee? 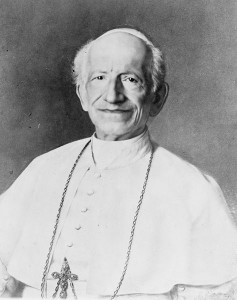 It was on this date, December 22, 1885, that Pope Leo XIII proclaimed an extraordinary jubilee. To most of us moderns, a jubilee is a special anniversary, or the celebration of it, but in both the Jewish and Christian traditions a Jubilee Year is a year of celebration and forgiveness of sin. The word "jubilee" comes from the Latin jubilaeus annus "year of jubilee," from a Hebrew word Yobhel (יובל), meaning "ram's-horn trumpet," with which the jubilee year was proclaimed.

"Thou shalt sanctify the fiftieth year," we read in Leviticus 25:10, "and shalt proclaim remission to all the inhabitants of thy land: for it is the year of jubilee." But that was Old Testament. It is commonly understood that Pope Boniface VIII instituted the first Christian Jubilee in the year 1300. Boniface, you may recall, was indicted by the Church itself for notorious skepticism, vice, and defense of vice. Before 1300, Rome had celebrated a supposed centenary year, but among writers who wax poetic over the "great remissions and indulgences for sins" (as Boniface put it*), there is only rare acknowledgement of the true purpose of the Jubilee.

These "remissions and indulgences" were to be obtained "by visiting the city of Rome and the venerable Basilica of the Prince of the Apostles," according to the Catholic Encyclopedia. That is, if you could afford to make the journey. If not, or if you were not up to the rigors of travel to Rome, then you could simply send the equivalent in the form of a cash donation and receive the same benefit. Thus was born the selling of indulgences. The difference between selling forgiveness for sin, and making a free-will offering in the hope of leniency in the hereafter, escapes those of us with literal minds!

Since the pope, in declaring a Jubilee Year, confines the "spiritual privileges" to the churches of Rome itself, this serves to attract as many rich foreign Catholics as possible. It is easy to guess what followed in the superstition-soaked Middle Ages: contemporaries of that 1300 Jubilee write that 30,000 pilgrims arrived daily, and one of them says, "day and night two clerics stood at the altar of St. Peter with rakes and drew off the infinite sums of money."**

Boniface intended for the Jubilee to recur only every century. But it was such a money-maker for the Church, that subsequent popes, with tender consideration for the people who might not see a Jubilee Year in their lifetime, shortened the interval to fifty years. There was another Jubilee Year in 1350, under Clement VI, then in 1390, under Boniface IX — already the interval had been shortened to 40 years — and again in 1423, under Martin V — so soon after, presumably, because Jesus lived only 33 years. Nicholas V declared his own Jubilee Year in 1450 to get the practice back onto its 50-year cycle — although the coffers of Rome didn't suffer a bit from a mere quarter-century respite. But Paul II disagreed and put the cash machine on its current 25-year cycle in 1475, attracting vast crowds of pilgrims.

The tradition was apparently unbroken until the 19th century, when the Jubilees of 1800, 1850 and 1875 were canceled for political reasons. But Leo XIII proclaimed his extraordinary jubilee ten years later, in 1885. The most recent Jubilee year, celebrating two millennia of Christianity, was in 2000. The Catholic Encyclopedia solemnly asserts that "it is impossible to doubt the evidence of innumerable witnesses as to the great moral renovation produced by these celebrations." If so, the effect was local and temporary, much like modern fundamentalist revivals. And it didn't prevent the Reformation and the rise of Protestantism — precisely because the Church was so corrupt and so greedy for selling treasures in heaven for cash down!