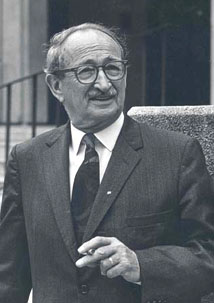 It was also on this date, December 20, 1902, that American philosopher Sidney Hook was born in New York City. A protégé of John Dewey, Hook earned a doctorate at Columbia University in 1927 and taught at New York University from 1927-1972, including over 20 years as head of NYU's philosophy department (1948-69). Perhaps his best-known quote is, "If one shoots at a king, one must not miss."

From a thorough study of Karl Marx, especially at the Marx-Engels Institute in Moscow — he wrote The Meaning of Marx (1934) and From Hegel to Marx (1936) — Hook later turned against Marxism and became actively anti-Communist. He once said, "More important than any belief a man holds is the way he holds it." His later publications included such works as Heresy Yes, Conspiracy No (1953), The Place of Religion in a Free Society (1968), and Academic Freedom and Academic Anarchy (1970).

But Hook's right turn might not have been as radical as many have supposed. As Vanderbilt professor Robert Talisse pointed out, Hook criticized the student anti-war movement and the Communist Party principally because they were anti-democratic. And he criticized the 1960s school prayer cases because he believed the education of the citizenry is preferable to a court-imposed mandate.

In fact, Hook was an Atheist and actively involved in the American Humanist Association and the Council for Democratic and Secular Humanism (CODESH). Hook wrote for The Humanist and Free Inquiry magazines and once said, "As a set of cognitive beliefs, religion is a speculative hypothesis of low order of probability."*

* Quoted in The Partisan Review, March 1950. ** Quoted in "Religious Liberty from the Viewpoint of a Secular Humanist," from Religious Conflict in America, 1964, p. 141.

Confucius (551 BCE) It was on this date, August 27, 551 BCE, by tradition, that the Chinese teacher and philosopher K'ung fu-tzu (孔子 Pinyin Kǒng Zǐ), known popularly by his Latinized name, Confucius, was born in the state of Lu. Though fatherless from the age of three, Confucius nevertheless acquired a good education and married […]