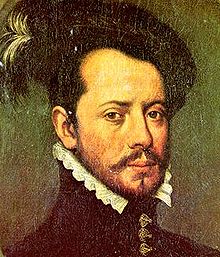 It was on this date, December 2, 1547, that the Spanish conquistador of Mexico, during the time of Aztec King Montezuma II (1466-1520), Hernando Cortes (Hernán Cortés de Monroy y Pizarro), died peacefully on a lavish estate near Seville. About a generation after Columbus discovered the Americas as a good source of Christian converts, Cortes found the Christianizing of the highly civilized Mexican tribes an excellent excuse to advance his appetite for conquest, control and capital.

Hernando Cortes was born about 1485 in Medellín, Spain, heir to a noble family of fallen fortunes. He gave up the law for adventure and embarked for the New World to serve the governor of Cuba. His big break came in 1519 with the opportunity to lead an expedition from Cuba to the Yucatán Peninsula, and thence into Mexico, to make contact with and converts of the natives. But some curious coincidences decided Cortes on conquest instead, and so he disobeyed his orders from Cuba.

It is rarely reported in popular history books that the reason the Christianizing of the Aztecs went so well in the beginning — as the leading Spanish missionary, Franciscan Bernardino de Sahagún notes in his account, written in Spanish, Latin and Náhuatl[1] — was that the Aztecs were already practicing many "Catholic" rituals! The Aztecs sang hymns and prayers, made offerings in their temples, burned aromatic herbs on the altars, fasted, confessed sins to and received penances from their priests, and practiced a sort of "holy communion," in which they broke up a paste image of their god and distributed it to be eaten with great reverence.

Even better, Cortes had a peculiar legend on his side: Quetzalcoatl, the Aztec creator-god. When the "feathered serpent" took human form, Quetzalcoatl was depicted as a pale-skinned, bearded man in a conical hat, his long, flowing robe decorated with crosses and feathers. Cortes arrived in Yucatán looking just so. Furthermore, continuing the parallel with the Christian story, Quetzalcoatl was the only son of a supreme deity. His father, known as Tonacatecutle, meaning "god of heaven," miraculously impregnated his mother, Chamalman (or Itztli), who was, like Mary, a virgin. Finally, Quetzalcoatl let himself be imprisoned (some say crucified) so that he could return to bring mercy and reason to the world.

But appearances, as the Aztecs found out to their sorrow, could be deceiving. Cortes had, in greater quantity and quality than did the Aztecs, the benefit of what Jared Diamond would call (in Guns, Germs, and Steel) the necessary conditions for a conqueror civilization: population density, large animal domestication, agriculture, resistance to diseases passed from animals and plants to humans, technological inventiveness, acceptance of change and improvement, literacy, and centralized government.[2]

What maximized the effectiveness of those advantages for Cortes was ambition, coupled with his military and diplomatic brilliance — but also a ruthlessness that led him to ensure loyalty by scuttling his ships on landing in Mexico, and to burn alive some Mexicans who had attacked his men. He conquered the enemies of the Aztecs, then Christianized them and turned them into his allies; he marched toward Tenochtitlán, put Montezuma under house arrest, demanded gold for ransom, and eventually destroyed the city — raising Mexico City from the ruins. In his Christian conquest, Cortes committed perhaps the greatest crime to history: he nearly obliterated the Aztec culture in his zeal.

For the glory of God? Perhaps in part. The Catholic Encyclopedia, which claims Cortes among the faithful, admits that aside from his military aptitude, shrewdness and daring, the explorer exhibited "no excess of scruples in morals." His contemporary, Bernal Díaz, noted of Cortes:

In his attendance on the services of the Church he was most punctual, devout in his manner, and charitable to the poor. ... he was a good cavalier, most true in his devotions to the Virgin, to the Apostle St. Peter, and to all the other Saints.[3]

This Week in Freethought History (March 24-30)