Charles Dickens and
A Christmas Carol (1843) 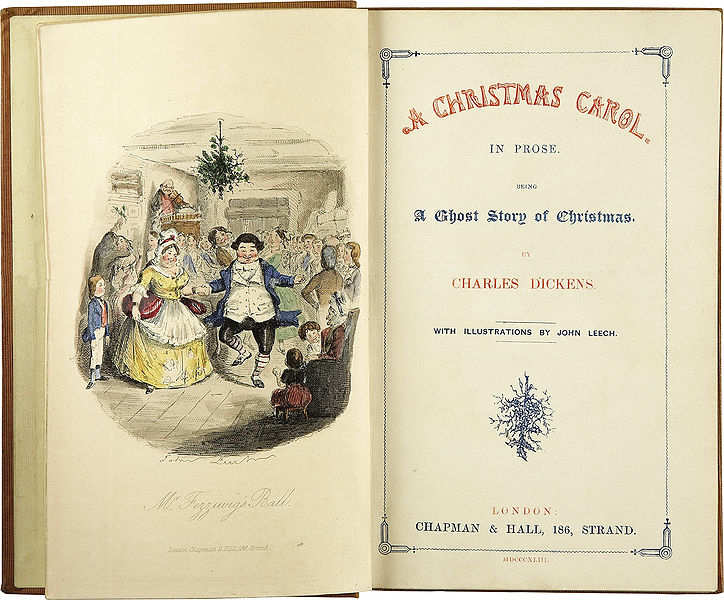 It was also on this date, December 19, 1843, that British author Charles Dickens' immortal work, A Christmas Carol, was published in London. Unlike his novels, A Christmas Carol was not first serialized: in fact, Dickens wrote it quickly to get out of debt from a recent American tour and a poorly selling prior novel, Martin Chuzzlewit (1843-44).

Dickens himself believed in God and had a sentimental regard for Christianity, but thought its puritan strain was socially harmful. Social-moral reform was Dickens' chief message in A Christmas Carol. Scrooge is shamed into changing his narrow, grasping, capitalist ways — in a dream and through the agency of ghosts — by being shown for the first time their human cost.

What enraged the clerics of Dickens' day was not capitalist excess, but that Scrooge is reformed without the traditional Wise Men, stars, babes in mangers, and other accoutrements of the Christian nativity scenes preached from pulpits — that is, that Dickens took Christ out of Christmas.

And as a social reformer, Dickens strongly criticized the joyless, dour Sunday laws of his time. In 1836, he issued a pamphlet entitled Sunday under Three Heads: As it is; As Sabbath Bills would make it; As it might be,* opposing expansion of legal limitations on Sunday recreation. To Dickens, the Sabbath bills were an attempt by the upper classes to control the lives of the lower classes, but vested in religious piety.

Not only did he argue that Sunday was the only day that the poor and workers could enjoy leisure time, time the upper and middle classes enjoyed all week. Dickens also dramatized the debate in A Christmas Carol, with Scrooge arguing for the working class!

I wonder you, of all the beings in the many worlds about us, should desire to cramp these people's opportunities of innocent enjoyment. ... You would deprive them of their means of dining every seventh day, often the only day on which they can be said to dine at all," said Scrooge. "Wouldn't you?"
... "You seek to close these places on the Seventh Day, ... Forgive me if I am wrong. It has been done in your name, or at least in that of your family," said Scrooge.
"There are some upon this earth of yours," returned the Spirit, "who lay claim to know us, and who do their deeds of passion, pride, ill-will, hatred, envy, bigotry, and selfishness in our name, who are as strange to us and all our kith and kin, as if they had never lived. Remember that, and charge their doings on themselves, not us."**

A Christmas Carol effectively reinvented Christmas as a secular holiday. Indeed, Dickens invented the greeting "Merry Christmas" as we understand it today. The message of A Christmas Carol resonates with readers still... 170 years later.

France once said, "Of all the sexual aberrations, chastity is the strangest," and "Religion has done love a great service by making it a sin."