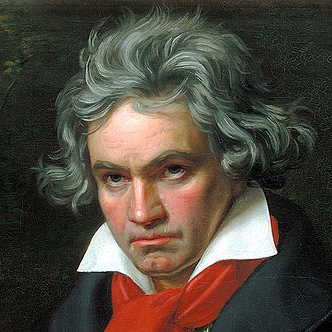 "Keep your eyes on that young man. Some day he will give the world something to talk about."
— Wolfgang Amadeus Mozart, after hearing Beethoven, quoted in O. Jahn, Life of Mozart, 2nd edn., 1882.


It was on this date, December 16, 1770, that we presume the German composer Ludwig van Beethoven was born in Bonn, although we have only the record of his baptism on 17 December. He was reared a Catholic and composed inspired sacred works such as Missa Solemnis and his immortal Choral Symphony (#9). Surely Beethoven was touched by God?

Beethoven wrote many secular works of equal inspiration. He was an apostate from the Christian creed and a follower of the Pantheism espoused by Goethe. This was no secret during his life. Franz Joseph Haydn believed Beethoven was an Atheist. Biographer George Marek, says Catholic-born Beethoven "never became a practicing one. There is no record of his ever attending a church service or observing the orthodoxy of his religion. He never went to confession. ... Generally he viewed priests with mistrust.[1] Anton Felix Schindler, who was Beethoven's friend, described the composer as "inclined to Deism."[2] Once, when violinist Felix Moscheles playfully wrote on one of his manuscripts, "With God's help," Beethoven altered it to read "Man, help thyself."[3]

Another biographer, Ludwig Nohl, says that Beethoven had "no dogma or narrow philosophy of life."[4] As Beethoven lay dying in 1827, friends concerned for his soul hurried a priest to his side to perform the Last Rites. Beethoven endured the superstitious ceremony, then uttered the old Latin formula, "Applaud, my friends, the comedy is over" ("Plaudite, amici, comoedia finita est.") He died on 26 March 1827. Sir George A. Macferren calls Beethoven a "freethinker" in his article in the Imperial Dictionary of Universal Biography[5]; the Catholic Encyclopedia does not dare to claim him.